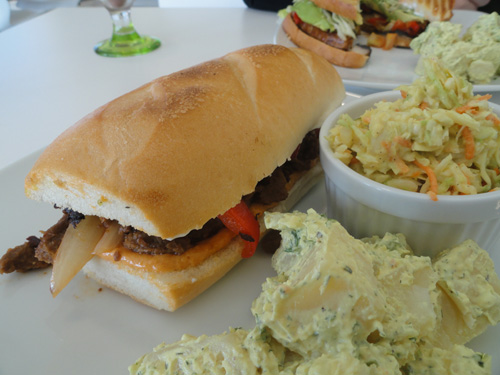 Loving Hut is a 100% vegan chain of restaurants with locations across the nation. That is a wonderful reality. The question of, “is it hard to be vegan?” should be eliminated from our dialogue. A short drive from our home base in Austin to Frisco for a game of Major League Soccer included a stop at the chain’s Arlington location, located in a strip mall across from a placed called “Sports Burger.” The juxtaposition was delicious, but not as delicious as the Baguette Charm, Loving Hut’s answer to the cheese steak sandwich.

The sandwich boasts succulent soy protein, bell peppers, onions, homemade veganaise and melted vegan cheese on a toasty baguette. It succeeds because it aims so low; often, vegan cheesesteaks are too ambitious, forgetting that the joy of an omnivorous cheesesteak is in its corruption, in its badness. A “good” cheesesteak, as defined by popular culture, involves enough grease to seep through a brown paper bag. Vegan cheeseteaks emphasize taste — the Baguette Charm emphasized a smoky flavor with sticky, molten hot cheese. Despite being homemade and vegan, it tasted bad for me. This made the sandwich extremely good. It’s a tricky line, and possibly one born from a childhood lived in poverty.

The true stars of the meal were the side dishes, vegan cole slaw (a rarity, at least in this style) and potato salad. They were perfection by any taste’s definition. 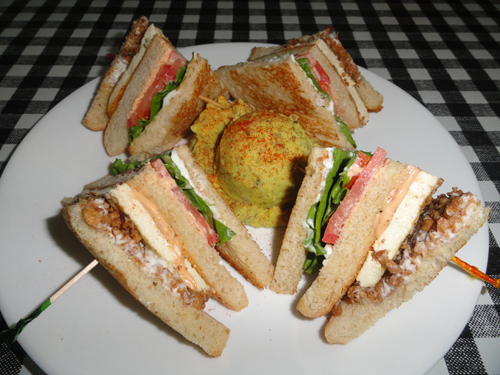 If I had been lucky enough to be a part of the “On Sandwiches” endeavor when it was first set upon, I may have had more influence on the “finest sandwich I have ever eaten” link at the top of the page.  My contemporary has a refined, almost ethereal sense of taste; however, differing opinions on the consumption of meat occasionally lead to creative conflict.  This being said, I hope not to question the finest sandwich in America, but to raise up Spiral Diner’s “The Mitch” alongside it as the finest sandwich I have ever eaten.  At the very least it is the finest meatless sandwich in America, and no vegetarian or vegan in the Dallas/Ft. Worth area worth their salt should miss it.

Named in honor of the irreverent humor of late comedian Mitch Hedberg (“I order the club sandwich all the time, but I’m not even a member, man. I don’t know how I get away with it.”), Ft. Worth’s Spiral Diner & Bakery adheres to the tropes of the classic club while reconstructing and enhancing it for a vegan palate.  Grilled tofu is topped with lettuce, tomato and surprisingly effective bacon bits both above and below the sandwich’s “special extra piece of bread.”  Served with an impeccable potato salad, preferable to chips, The Mitch is actually so good that it detracts from the remainder of Spiral’s challenging and adventurous menu — more times than not, my peers are dissuaded from a tasty vegan meatball sub or the avocado-laden “Simpleton” not because of the sandwiches themselves, but because they would so miss the taste and experience of Spiral’s Mitch.

The only negative to The Mitch could be the Texas area’s over-reliance on chipotle mayo for vegetarian sandwiches when a mustard or standard, eggless mayo would suffice.  It is a valid criticism — vegan variety is sometimes taken for granted in the cultural oasis of Central Texas — but one can only imagine that those sandwiches bear a similar taste in an attempt to draw glory from The Mitch.  They do not succeed.

I have learned the rule the hard way.  Order The Mitch, or spend your afternoon chewing through diced seitan, wishing you had.