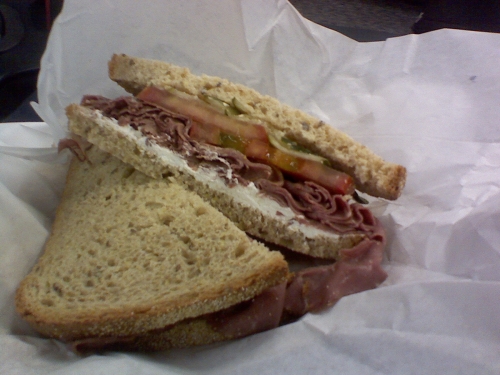 One’s options for food in airports might charitably be called “woeful.” Fast food, overpriced, overcooked hamburgers in pseudo-sportsbars, it just isn’t a friendly scene for your average sandwich enthusiast. I was surprised, then, to happen upon Klein’s Deli. Formerly a standby in the Portero Hill section of San Francisco, Klein’s has apparently taken up residence in two locations inside San Francisco airport. With their roster of sandwiches named after notable women of the 20th century, I thought I might finally happen upon a good airport sandwich. I ordered the Piaf, the legendary singer transmogrified into roast beef, cream cheese, horseradish, dill pickle and tomatoes on light rye. There will come a day when I bring you a report of an amazing airport sandwich. That is not today. The Piaf is a decent sandwich. It’s a fine concept; roast beef, cream cheese and horseradish would nicely compliment each other if deployed in the right proportion. That’s the issue, though, isn’t it? Cream cheese isn’t bold in flavor but it is perfectly capable of drowning out other notes, and there simply wasn’t enough horseradish here to stand up to it. The few thin slices of pickles also weren’t up to the task at hand. This could have been a really great sandwich, in a perfect world you’d see tender, in-house roasted beef, and enough horseradish to let you know it was there. But this isn’t a perfect world, and the sandwich I got, while tasty enough, just wasn’t that great.