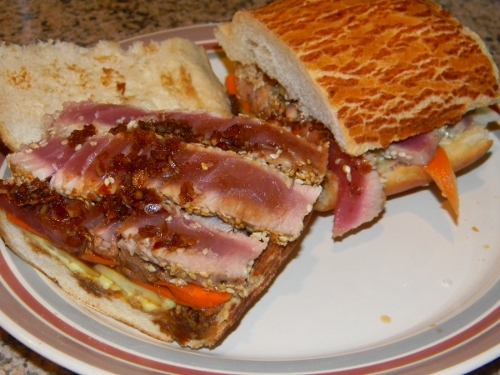 When I went to Ike’s Place, I tried the first sandwich on the menu for a reason. ” In that sandwich,” I wrote, “one often finds the favorite child; The sandwich loved longest, made most often, the sandwich in which someone’s dream begins to take form.” For me, this is that sandwich. Don’t get me wrong, I have no plans to open my own establishment any time soon, having no desire to turn my passion into my business and having no access to capital. But this is my sandwich. It is the sandwich I think of in idle moments, the sandwich that instills me in me a possibility I know I must pursue.

When I spoke of the tuna steak sandwich at Ramsi’s Cafe on the World in Louisville, I made it a point to mention how shameful most of the tuna we eat is. That still stands, one day the tuna fish will be gone and when we are asked about it all we will be able to do is lower our heads and think about how we allowed so magnificent a fish to be associated with such mediocre cuisine. This sandwich is an attempt at something better, a love note to a fish, an attempt to live up to a possibility.

I don’t have it quite right. It’s a good sandwich, probably the best I’ve ever made, but it isn’t quite right. The preparation starts with slices of carrot, about a sixteenth of an inch thick. They go into a marinade of soy sauce, rice vinegar and water (in a 1-1-1 ratio), ginger, toasted garlic, red pepper flakes and a touch of honey. After a few hours in there they come out, and the marinade goes into a skillet to be cooked down.  Similar slices of cucumber are prepared but left unadulterated. Wasabi mayo is prepared, with a strong emphasis on the wasabi. I’m no great fan of mayonnaise. In fact, my attitude might be best characterized as “tolerant.” It has its place, but if you use too much…well, I hope you’re right with the lord, because I’m not likely to forgive you. But I find it unobjectionable as a sort of neutral vehicle for another flavor, and it performed well here. The bread went into a 200 degree oven to really maximize the crisp, although I’m not really sure how much this adds to the final product. Anyhow, the tuna steak is coated on both sides with sesame seeds and black pepper, and it goes into a hot pan for a scant couple of minutes. Cooking tuna for a sandwich is no different than any other application, and as always it’s best to undershoot. After coming out of the pan the fish is cut into quarter inch slices, laid atop the carrots, and finally drizzled with the reduced marinade.

It isn’t quite right. Between the carrots and the sauce there’s too much soy. I still want to get the ginger and the garlic onto the sandwich, but I need to back off the soy somehow. Perhaps the ratios in the marinade can shift, I’m still not sure. I might have gone too heavy on the wasabi, although to be frank I prefer that to going light. The flavor of the fish is well represented in the sandwich, but it’s missing something that would bring the ingredients from combination to harmony. I think a bit more black pepper in the coating will help things come together. But don’t let me run this down! This is a damn fine sandwich, and I only spend so many words pointing out its flaws because I know what it is capable of. This is already the best sandwich I make, and it’s only going to get better.

5 thoughts on “Tuna Steak Sandwich – Made at Home”