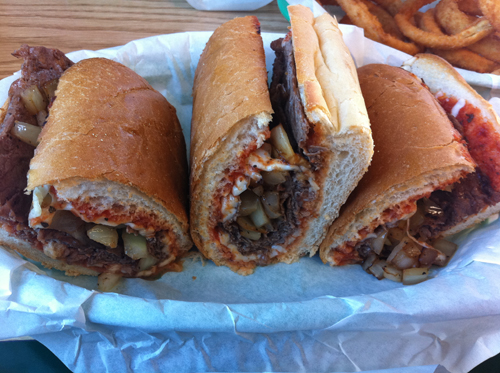 Many times, when at a new establishment with an eye toward a sandwich to review, one must opt for the road less traveled. One cannot always expect a sandwich counter to offer anything beyond “Roast Beef Sandwich” or “Turkey Sandwich” or “Cold Cut Combo.” Thus, while scanning the board at Mick’s Sub Shop, the words “Pizza Steak” jumped out at me and I was forced to inquire. I was informed that the sandwich consisted of “steak,” grilled onions, pizza sauce, and mozzarella. Intrigued by what sounded like a beef parmigiana sandwich, I placed my order.

The end result was, perhaps, less than it could have been. But it could also have been much, much worse. The first notable aspect of the sandwich was that the large was cut into thirds, an anomaly if there ever was one. The grilled onions were hardly more than warmed, and if they were properly browned and caramelized, I feel it would have contributed a great deal toward making this a better sandwich.

As I elaborated in last week’s post, too often is sliced roast beef presented as “steak,” but in the case of presented a sandwich called “pizza steak,” one can forgive the euphemism. This was a greasy and strange sandwich, although not actively bad. I cannot in good conscience recommend the item, but I will say this: the third of the sandwich that I took home with me was immensely better two days later, eaten cold out of the refrigerator, than the two thirds I consumed fresh and hot inside Mick’s.