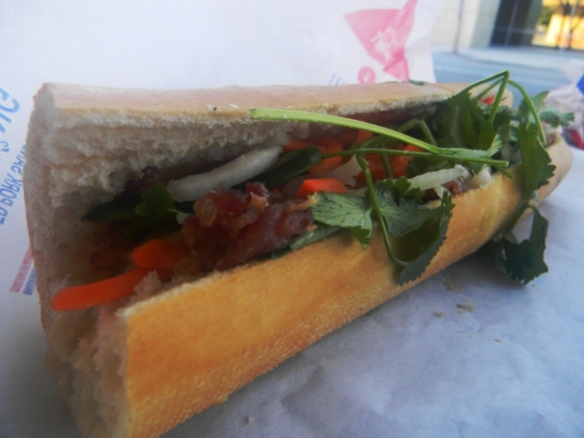 In my review of Bánh Mì Zớn, I spoke briefly about the future of the bánh mì. “It involves significantly more widespread availability,” I posited. “It involves evolution, offshoots and different takes. It involves franchises.” Lee’s is that future. With at least 41 domestic locations stretching from California to Oklahoma and a handful of international locations, Lee’s 20 years of existence have been fruitful, seeing the kind of rapid spread one might expect from the purveyors of fine sandwiches. The establishments seem built for expansion; there are bright, English signs, most stores are spacious and clean, they offer traditional American sandwiches as well as the standard offering of Vietnamese.

I’m not inherently opposed to the idea of a franchise. They’re not my preferred place to get a sandwich, but I think they serve a purpose and, evaluated on their own terms, they have a decent amount of value. A Big Mac tastes like a Big Mac no matter where you get it, no matter how long it’s been since you last had one, it’s always exactly what it was, exactly what you would expect. I can understand why some people find this objectionable, but I can also see the perverse appeal in it. So there’s a logic and a role to the franchise, even if it isn’t the most noble role around. Think about it; associates have written me as this month has progressed, bemoaning the lack of bánh mì options in places like Fort Wayne, Indiana. So if we hope that there will come a day when people in mid-range and far-flung corners of this country can get their hands on a delicious baguette full of well seasoned meat and fresh vegetables when they want them, can we really turn our noses up if it takes a homogenized, repetitive establishment to achieve that? I would say not.

It is by these standards that Lee’s falls short, unfortunately. Lee’s started as a catering truck in San Jose, and I dearly wish I’d been able to sample the wares from that truck. That is a privilege that has thus far escaped me in life, to watch an establishment grow, changing over time, meeting advantages and disadvantages along the way. All I can do is examine the product as it stands today. And I would tell you how the product fares today, but tragically it all depends on from which Lee’s you order your sandwich. By design, the Lee’s franchises vary in three major ways. There are so-called production units, where baguettes are baked and ingredients prepared both for sandwiches sold on-site and to be distributed to other Lee’s in the surrounding area. There are non-production units, where these ingredients are received and then sent out again, and finally there are mall units, non-production units situated in food courts. As you might imagine, food quality is typically highest at a production unit, and it can vary considerably at other locations, based on their proximity to a production unit, their average sales volume, and who knows what else. So Lee’s falls short in what is perhaps the sole truly redeeming value of a franchise: consistency. Subway may charge you $5 for a big pile of salt, but it’s the same pile of salt every time. Even within a single Lee’s, the sandwiches vary considerably from day to day. The grilled pork sandwich pictured at the top of this page was flavorful and with a crispy baguette, a reasonably facsimile of a proper thịt nướng sandwich. But on other days the sandwiches have been dry, with tough baguettes and sparse filling. The second sandwich pictured is xíu mại, which had a texture not so much of broken up meatballs but just a mushy pile of meat, an extremely salty one at that.

Tragically, as the bánh mì makes its way in the larger world, the strongest wind in its sails is a sputtering one, one of inconsistent vision and execution. Maybe these are growing pains, and as Lee’s settles in things will start to smooth out. I suppose that’s a possibility, but that might be asking more patience than your average sandwich enthusiast can muster. I know that someday someone to whom I have extolled the virtues of the bành mì will try one and not be impressed. To my knowledge it has yet to happen, but it’s inevitable. While it would be disingenuous to deny the self-interest in that idea, it isn’t really about me. It’s about what I know about the bành mì, the heights I know a sandwich can reach, and my sincere desire that any and all interested persons experience those heights. Anyone who loves sandwiches deserves to have a really great bành mì. Lee’s works to put this farther out of reach, and for that I cannot forgive them.