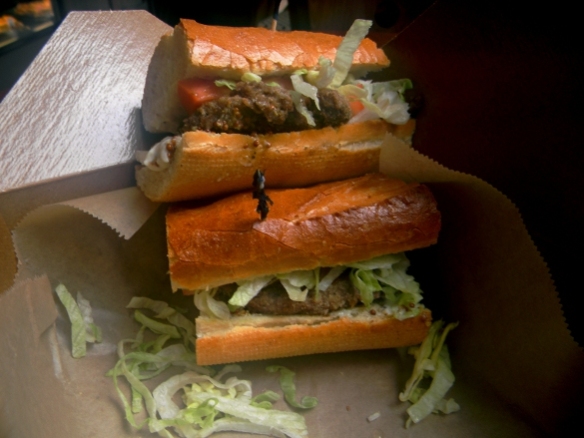 I believe that almost anything can be effectively incorporated into a sandwich, given the right plan and proper execution. There aren’t many things at which I’ll turn my nose up on sight. That said, I often despair at the sight of iceberg lettuce. Don’t get me wrong; like anything else, it has its place. It’s got a lot of water to it, and it it’s pretty crispy, so it works well in spicy situations, or playing against softer ingredients. More often than not, though, it’s not deployed in those situations but instead is just the thoughtless lettuce of the lazy, an unthinking default offering, adding nothing to the sandwich. Combine it with the sight of a mushy slice of hothouse tomato and before your first bite you know that this is a sandwich where nobody was trying very hard. That’s always disappointing, but it’s exceptionally so when other ingredients are above par. The bread at Bijan Bakery was stupendous, a flavorful sourdough with a really substantial crust. The kotlet, a patty of ground meat with a strong dose of turmeric, was also pretty tasty. There was a bit of always-tasty whole grain mustard involved as well, leaving the sandwich a puzzling bundle of contrasting elements. Could this sandwich have been the product of some committee, half its members putting in care and experience, the other half slacking off? Was it assembled by survey, or by mishmash of remaining parts? Perhaps someone died in front of a half-created sandwich, and some uncaring distant relative wrapped things up without a thought for the legacy! I’m sure the real story is much more mundane, but whatever that story is, what sat in front of me was inescapable fact: I had been served a sub-par sandwich.