This is the 200th sandwich review here at On Sandwiches, and I wanted something special to mark the occasion. a lot of things were considered and ultimately rejected: treks to especially expensive or ostentatious sandwiches, eating challenges. No, on this occasion I’d like to talk about the sandwich I eat most frequently: The peanut butter sandwich. It sometimes surprises people to learn this, but it’s true. More often than not I find myself, with no small amount of pleasure, enjoying two humble pieces of bread with a bit of peanut butter in the middle. I don’t go quite as crazy for them as I used to (I must confess that for a time I was consuming upwards of six per day) but they have a very special place in my heart. So, for the 200th review here at On Sandwiches, I present the peanut butter sandwich, six ways.

Peanut butter and Nutella is a popular combination, and with good cause. It’s delicious, but I can’t help but see it as a little bit off the mark. You’re after that peanut butter & chocolate pairing, but the first three ingredients in Nutella are palm oil, and hazelnuts. Why wade through all that? If you want chocolate, get chocolate. I say the darker the better, get something above 75% cacao and let the chocolate flavor really shine through. Peanut butter is a rich, savory flavor, and the complex flavor compounds present in cacao make a much finer pairing than straight sugar. Shaving off a larger block of chocolate is the way to go, giving you a bit of texture contrast in your sandwich. Soft bread, smooth peanut butter, and crunchy chocolate. It’s not any everyday sort of sandwich, but it’s a fine treat now and then. 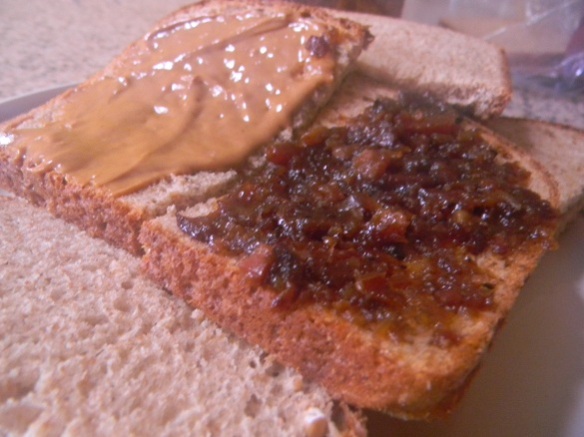 As I considered this post, I knew I had to feature bacon. This is the internet, isn’t it? I don’t really know what to think about bacon anymore. I support my associates in their polemics, but it is tasty. It’s not everything in the world and more, it’s just tasty. With that in mind, On Sandwiches presents not the considered-to-death strip of bacon, but bacon jam. It’s a concoction from the fine folks at America’s Test Kitchen; bacon, onion, maple syrup, and a few other things are cooked down and run through a food processor. It’s got a chewy texture and a salty/sweet flavor. It’s got a lot more going on than regular old bacon, but all the same I felt this sandwich was…kind of boring. In fact, it may have done quite a bit to nudge me more towards my associate’s position on bacon. It wasn’t bad, it just seemed like bacon wasn’t a worthy companion to peanut butter. I surprise myself in that conclusion, but I can only tell you what the sandwich told me.

This is an all-time classic, of course, and I don’t have too much to add to what’s already been said. I drizzled a bit of maple syrup in here, in place of the honey, but I went really light and in the end the flavor was neither noticeable nor necessary. The warm peanut butter, the crispy bread, the sweet bananas, this sandwich is pretty close to perfection. It isn’t magic, though, and the preparation requires a careful hand. It can easily tip towards being too greasy, or the bananas might be too thick and drown out the peanut butter, or there’s too much peanut butter and the whole things falls apart, or it spends a bit too long on the stove and you’ve got a charred mess. There’s a great reward in this sandwich, but any enthusiast who sets out after it has to make a careful approach. I kept careful watch on the sandwich and was rewarded with a warm, delicious sandwich.

I didn’t get a picture of this one, but I imagine you’ve probably seen a PB&J at some point in your life. This one is all about the ratio, and that can vary significantly based on what kind of jam you’re using. Apricot jam benefits from a heavy hand, I feel, with big chunks of apricot assuming an almost starring role. Seedless raspberry jelly, on the other hand, is best laid down thin, lest the sweetness overwhelm the peanut butter. 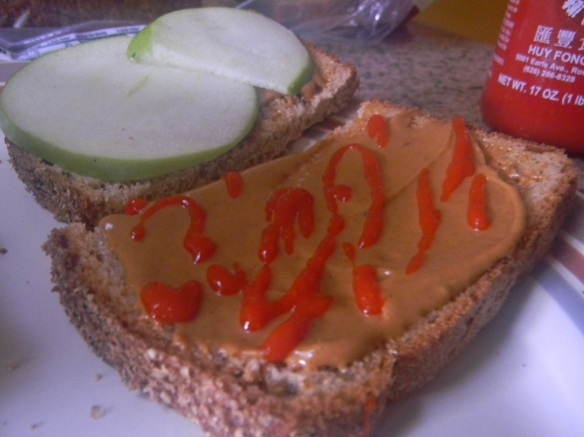 Oh, this was a fine combination. I was surprised by how tasty this was, and I went into it expecting a tasty sandwich. The peanut butter and the Sriracha pair incredibly well, as any Thai food enthusiast would suspect. The apple is sweet but tart, rounding out the flavors, and the crisp texture is a wonderful addition. It’s hot, it’s savory, it’s sweet, it’s tangy, it’s all this and more. Each flavor dances right up to the edge of too much, then recedes as another flavor springs off the next bite. This is “make one, eat it, immediately make another” territory. If this sandwich sounds like something you’d enjoy, I cannot recommend it enough.

It’s the essence of a sandwich, isn’t it? Two slices of bread, a bit of something in the middle. Despite all of the above, nothing more is really needed. It can be great when it’s there, but should a peanut butter sandwich be present in nothing but its most humble form, you won’t hear a word of complaint out of me. I like mine with creamy peanut butter on wheat, and while I respect others’ choices, I have trouble seeing peanut butter on anything but wheat. It’s what I was raised on, and after thousands of sandwiches the taste is set. I have a definite preference in the matter of creamy versus crunchy, but I see the merits to both. The peanut butter sandwich is too humble to be considered the greatest sandwich, but as a concept, as a category, it really is spectacular. There’s so much to love; it’s cheap, it’s filling, it’s portable, it can be consumed quickly or slowly savored, the peanut butter is rich and savory, no less nutty for the notable handicap of being a legume. I feel as if my praise here as fallen short, and I suspect that I could write for days and days and still feel that way. It’s simply a wonderful sandwich, and I suppose I can trust that anyone who also enjoys one will know exactly how I feel.

6 thoughts on “Peanut Butter Six Ways – Made at Home”