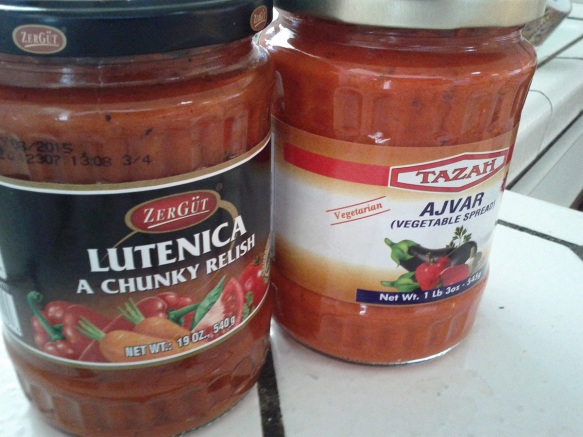 I had never heard of lutenica and ajvar when they were suggested to me. Native to Eastern Europe, I simply hadn’t come across them. But they came from a noted associate, so though it took me some time to get around to them, now that I’ve done so I’m glad I did. The challenge with these sorts of sandwiches is that if you include too many ingredients you risk losing the focus of the sandwich, and if you don’t add enough you simply haven’t much sandwich. Condiments are condiments for a reason, in other words. But I like a challenge, so ajvar and lutenica sandwiches it was.

Ajvar is built around roasted red peppers, with plenty of eggplant and garlic to round out the flavors, and chili peppers to give it a backbone of heat. The idea you see above came from a different associate, and is simply switching ajvar into a caprese sandwich in place of the tomato. This resulted in a fine sandwich, with the spicy finish of the ajvar giving it a dimension the standard caprese sandwich doesn’t have. A fine sandwich, but not one that represents a tremendous degree of difficulty. I had bigger plans in store. 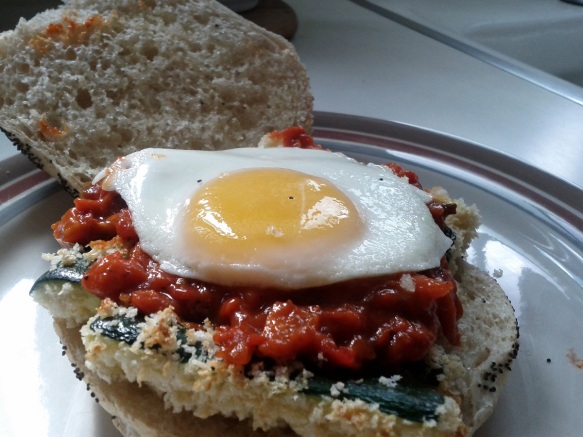 But first, the lutenica. Built around tomatoes, peppers and carrots, this was sweeter than the ajvar and lacked the heat on the finish. (I understand that lack of heat may be atypical for lutenica, but the contrast between the two served me well.) With concerns over overwhelming the relish in mind, I paired it with some zucchini, panko breaded and baked, and a fried egg. Zucchini don’t have a tremendously assertive flavor, and the egg is resonating on a different level than the relish. This one worked as planned, with the vegetables in the relish playing well with the zucchini and the egg giving the sandwich a rich body it would have otherwise lacked. But this also wasn’t too adventurous. The challenges of building a sandwich around a spread deserved a bold gambit.

That, friends, is a wheat roll with ajvar, roasted carrots, and nutella. Ajvar is sweet and spicy. Chocolate and spice go quite well together. Was it so crazy to believe that the key to a sandwich built around a spread was another spread? But two condiments does not a sandwich make, and that left me considering the middle. Contrast didn’t seem like it would be the right play, something bitter or with too much contrast would just throw off the harmony. There are only a few ingredients here; if they aren’t working together there isn’t much left. So that meant carrots. One of the sweetest of vegetables, a roast carrot had the crucial sugars to play along with the rest of the sandwich, but a nuttiness that brought something the other two were lacking. This was a sandwich that doesn’t sell itself on the first bite, but if you stick with it, there’s something very enjoyable going on. I like this sandwich. I’m not going to make it every day, or even every week, but if I found myself entertaining associates on a Saturday afternoon, I just might put together a few just for the thrill of making people eat chocolate carrots.

Lastly, a sandwich that is a nod to the fact that these are, ultimately, condiments. That is not a criticism, mind you, just a note that they actually go quite well with any number of things. Here I went with a bed of spinach, and some vegetarian faux-sausage with ajvar piled on one half and lutenica on the other. It was delightful, and any actual sausage would have worked just as well. That’s sort of the point, that most anything would work. Any sandwich enthusiast should be able to put a spicy/sweet condiment to work on a dozen different sandwiches without strain. If you’re willing to sacrifice the spreads as the central element of the sandwich, the possibilities are nearly limitless. I’ve now got two nearly-full jars in my fridge, and a good number of tasty sandwiches in my future.

4 thoughts on “Lutenica & Ajvar Sandwiches – Made at Home”