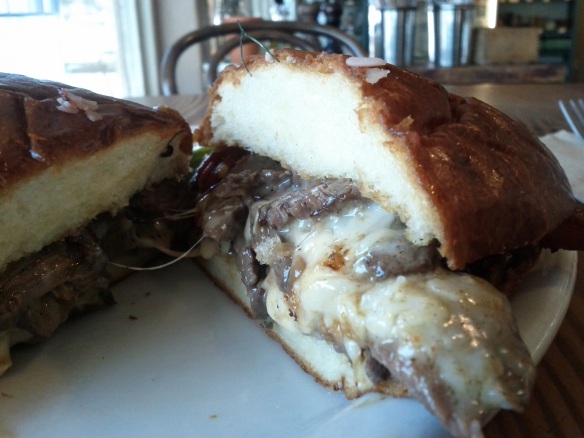 Upscaling a cheesesteak is never a question of could one do such a thing, but rather should one do such a thing. It’s always possible, and long-time readers will recall that I came out against the filet mignon cheesesteak from Citi Field, calling it “the ugly product of a severe misunderstanding. I stand by that, as it was filet mignon and pepper jack, a high/low combination that’s doomed to fail. But consider the above: skirt steak with gruyere and cheddar, with sauteed onions and peppers. That seems a fair middle ground, better than the average lineup but hardly ostentatious. It was delicious, but it was also very, very (very) rich, running dangerously close to too-rich-to-finish territory. The cheesteak is a far more delicate thing than most people seem to think, at least judging by the examples I continue to encounter. I suppose we’re better off, though, having people make new attempts at grand things, even if some of them fall off the mark. The cheesesteak at The Curious Palate may not be exactly right (or exactly necessary), but it sure is delicious.