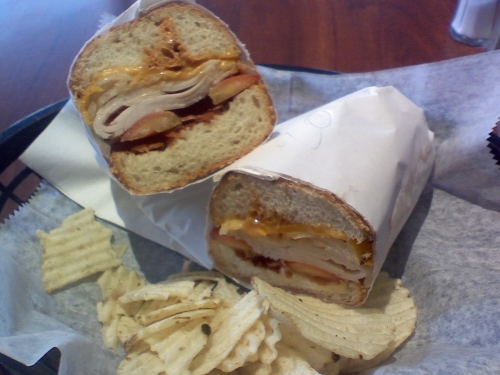 A short while after I posted last week’s Panera Bread sandwich I got to thinking about a sandwich I ate some time ago. Back in December while spending some time on the east coast I stopped at Tiny’s Giant Sandwich shop and had the Spicy Rizzak. The reason I was thinking of it after the Chipotle Chicken is that it’s virtually the same sandwich. The Spicy Rizzak is sliced turkey, bacon, tomato, red onions with cheddar cheese & chipotle mayo on a toasted semolina hero. The Rizzak succeeds where the Chipotle Chicken fails in two big ways: The first is by having a lighter hand with the cheese, letting the chipotle mayo stand tall in contrast. Dairy and heat are a natural pair and it can be tough to keep one from overpowering the other on a sandwich. The second major contribution to the Rizzak’s superiority is the roll. The Panera Bread sandwich was presented on thin sliced french bread, barely rising above inoffensive at some points and rendered soggy by the tomato at others. The Rizzak comes on crusty semolina bread, a roll of strong body and texture that holds its own before yielding with a crunch.

Everywhere Panera Bread faltered Tiny’s Giant Sandwich shop excelled. It is comforting to me that with a little thought and a different hand a very poor sandwich can be turned into a very good one and I am thankful that establishments like Tiny’s are out there doing just that.