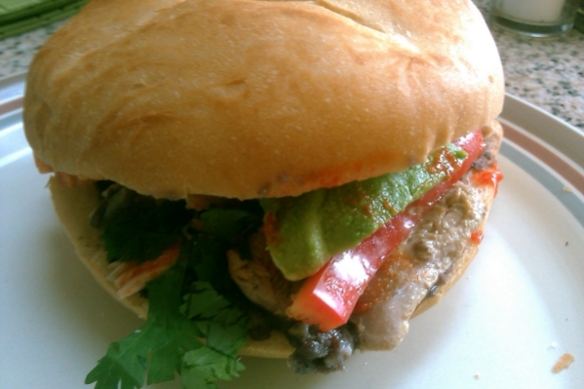 This number started from the avocado and grew outwards. I’d had a sandwich with black bean hummus last time I was at Press 195, and it was tasty as all get out. So I whipped up a batch of my own, toasting some garlic in a skillet then combining it with black beans and running it through the food processor. It ended up a little loose, but cooking it down took care of that. A layer of that was spread on the bottom, some shredded chicken thighs tossed in lemon juice went on top of that, followed by red pepper, cilantro, avocado and Oaxaca cheese. The whole thing came together fairly well, although my construction wasn’t spot-on. Next time I think I’ll layer the red pepper under the chicken. Direct contact with the roll will give it less of a chance to roll around, and everything else will be held together by the pressure. A few stray bites aside, this was a delicious sandwich. It occurs to me that it’s not particularly adventerous; each ingredient seems like an almost obvious extension of the one preceding it. Is that such a grand crime, though? Sometimes we are sharing a sandwich with an associate and we want to take no risks, leave no chance that we will need a fumbling explanation about how sardines and sweet potatoes seem like a natural pair, if you just look at it from this particular angle. No, some days that’s simply inappropriate, and it’s better to go with something you know will work.