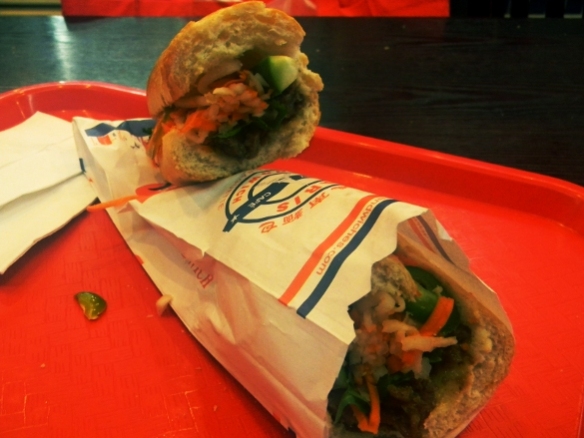 Paris Sandwich is around the corner from my beloved Bánh Mì Saigon, and was my first stop in the neighborhood. I hold the sandwiches at Bánh Mì Saigon in high regard, of course, and I was very curious to see what kind of sandwich shops made it their business to stand in direct competition to what I see as the finest possible sandwich. I wondered how they might attempt to set themselves apart, in what ways they might try to gain a leg up. One thing Paris Sandwich does is serve a lot more food. Where Bánh Mì Saigon serves sandwiches, spring rolls and a few dishes with noodles, Paris Sandwich has all that and more, with rice dishes, Vietnamese waffles, curries, all manner of things. One thing in particular that jumped out at me was, beside the listing of Vietnamese sandwiches (labeled as such), there was list of “Euro-Asian Sandwiches,” which contrasted the standard Vietnamese mayo, pickled carrot and daikon with American mayo, lettuce/tomato/onion and cheese. Lee’s offers American style sandwiches as well, but they seem to understand them as separate sandwiches, constructed in their own right sometimes on a baguette, but other times on a croissant. Paris Sandwich seemed to posit bánh mìs and these Euro-Asian Sandwiches as direct cousins. I tried to conceive of any of the fillings I’ve had on a bánh mì pairing with lettuce/tomato/onion and a slice of cheese, and the resulting mental picture was not a pretty one. Perhaps someday in the future I’ll give one a go, just to find out if it’s as off-putting as it seems to be, but it can certainly wait.

As for the sandwich I did have, Paris Sandwich proved no match for my favorite. The baguette was nice and crispy, but the pork had a strong teriyaki taste to it, a flavor I’d never before encountered in a bánh mì. The veggie mix was a bit out of proportion, leaving carrots overpowering everything else. This was a much better sandwich than I found at Sing Sing, but the conclusions remains the same; with better options just down the block, there’s no real reason to stop here.