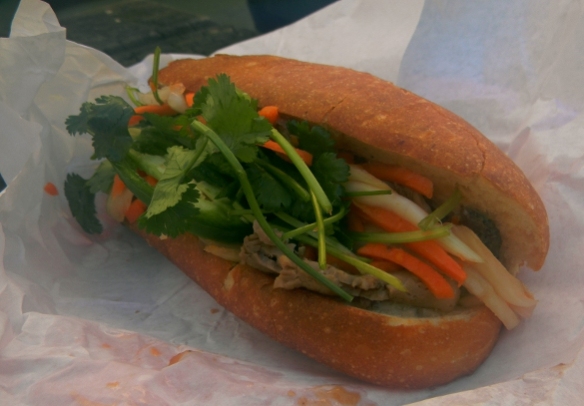 Saigon Sandwich Shop is spoken of as a hole-in-the-wall, but it’s really more of a place that just stuck their counter right at the top. There are a pair of seats facing out of the front window, but you’re really meant to take your sandwich and be on your way. That’s precisely what I did, picking the roast pork from the simple menu board and heading to a local park to enjoy. Before that, though, I watched the sandwich being assembled and wasn’t particularly thrilled with what I saw. Most bánh mì sandwiches have a bit of a rakish angle to their construction, built from the inside out on bread that isn’t sliced all the way through, this can have a negative impact. Sometimes it’s enough to just poke things around a bit and get a perfectly acceptable construction, but other times things stray too far from ideal and there’s no getting them back. Sing Sing was too far gone, and though Saigon Sandwich Shop was not, it wasn’t through the effort of the person putting it together. The construction was quite haphazard, with the sandwich being stuffed at lightning speed, a bunch of each ingredient grabbed with a pair of tongs and stuffed into the sandwich, only secured by the next bunch coming in after it. Luck was on my side, though, and the sandwich came together fine.

Perhaps the luck carried through from the construction, because this was a pretty good sandwich. The bread was some of the best I’ve had in a bánh mì, with a very strong crust but a moist, full bodied interior. Many bánh mì baguettes become efficient husks, minimalist wrappings to celebrated interiors. The baguette at Saigon Sandwich Shop stands up on its own. The meat was moist and there was plenty of it, and the mayonnaise had a nice flavor to it. The veggies & cilantro could have been more flavorful, but taken as a whole the sandwich had good balance and was mighty tasty. Eating so many bánh mìs the quality spectrum begins to blur, and it takes a particularly good sandwich to stand out. Saigon Sandwich Shop has just that kind of sandwich.