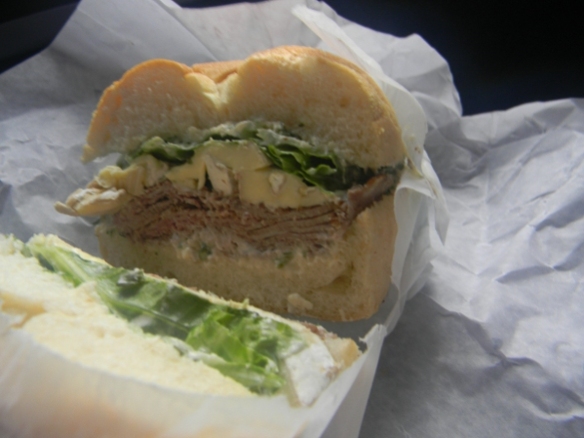 I’m always given a bit of pause when going for a sandwich at an establishment named for some other food. Plenty of such establishments offer fine sandwiches, but it’s always cause for the tiniest bit of suspicion. I should have trusted my instincts. The French Bull at Bagel Maven is roast beef, brie and watercress on ciabatta bread. Mayonnaise and horseradish round things out. That’s well and good in concept, but in execution there was much too much cheese. Believe it or not, what you see above is merely half of what was intended for the sandwich, and I actually broke with my own policy and offered instruction to the man assembling things. Watching it being made, I saw the pictured amount of cheese added and then saw the sandwich maker reach for anther handful. I found myself unable to hold my tongue. “That’s enough cheese,” I called, and the woman behind me wondered aloud just how much he had intended to add. That will forever remain a mystery, but I do know that so long as I was shouting instructions I should have called for some subtraction. The beef and the cheese are there in almost equal parts, which is hopelessly out of balance. The horseradish was completely lost, something that happens a lot more frequently than I would prefer. In more fitting proportions I think this would have been a fine sandwich, but as I received it it was no good. Balance is delicate, tremendously delicate, and it’s all too easy for one element to derail a sandwich. Any serious sandwich enthusiast knows this, which makes it all the more a shame that so many establishments seem so set on reminding us.