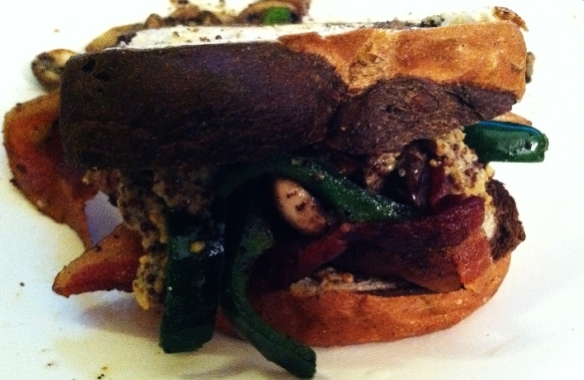 From time to time esteemed members of the larger community of sandwich enthusiasts have a tale or idea too good to be kept to themselves or only shared privately. In these instances, On Sandwiches is happy to feature these contributions. In this case, Jon Bois says some things that need saying.

Do you like bacon? Don’t bother answering. I have suffered your memes, your retweets upon retweets sharing with the world that you are on #teambacon, your “bacon = FLAWLESS VICTORY” image macros. Stop for a moment and consider that you are not on a culinary journey, but rather are rolling through the same closed circuit.

Perhaps it does not interest you to create; perhaps you would simply do. Ultimately I must respect, and even celebrate, your “journey,” because your life is yours to live. Myself, I set upon a quest: to relegate bacon to a supporting role in favor of, of all things, a condiment.

That quest ought to sound odd to you, because it reflects an odd interest of mine: I am fascinated when a purportedly tertiary element steps into another role entirely. I like to watch pitchers bat. I enjoy reading about merry-go-rounds in Ghanaian playgrounds that generate electricity for their villages. I am amused to consider that of all the knives and saws and things that rest within this age-old pocket knife of mine, the utility of its scissors has outlasted them all.

I constructed a mustard sandwich that was decent enough to drag along some bacon with it.

Mustard is the greatest of condiments, and it’s also among the simplest to make. I did so with some brown and yellow mustard seeds, white wine vinegar, and salt, then scooped a liberal amount over some sauteed mushroom and poblano pepper. It was strong, which I prefer mustard to be, but not overwhelming. I was so pleased by how it played with the vegetables that I would have been perfectly satisfied to slam the door with the top slice of marbled rye and forget the bacon altogether.

No … no. It was time to humble bacon, to re-assign it under the command of a condiment. And so it did, with two crispy strips tangled through the mustard and vegetables. Indeed, the mustard starred, and the bacon, though its presence was welcome, provided no more than secondary saltiness and fattiness.

The sandwich wasn’t quite “great.” It was simply “good.” But I succeeded in taking this salty, shriveled mediocre-meme generator and reducing it to the least important component. You are on your thousandth lap under the bright lights; I am in the wilderness. Daybreak approaches. Will you notice?

4 thoughts on “Guest Post: Jon Bois on a Bacon with Homemade Mustard Sandwich”