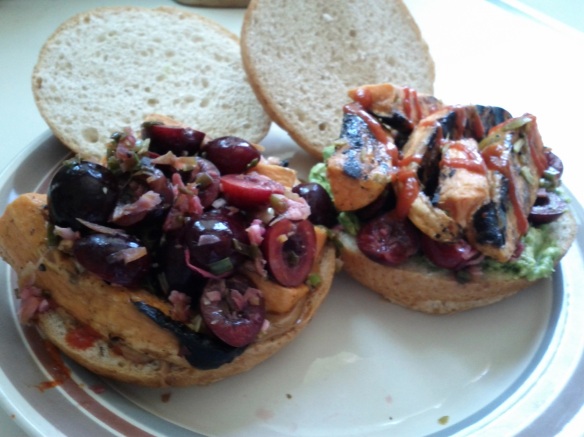 As any enthusiast knows, a great many sandwiches start with leftovers. I’d happened to make some grilled sweet potatoes with cherry salsa, going by a recipe I happened upon when looking for something delightful but vegetarian. The potatoes were grilled and then tossed with lime zest, cumin and chili flakes, while the cherries were combined with scallions, fresh ginger, a dose of lime juice and more zest. It was delicious, and a few days later I pulled the leftovers out of the fridge with a sandwich in mind. It would have been simple enough to just toss the two onto some bread and be done with it, but in my mind leftover sandwiches don’t end with whatever you have in the fridge, you start there.

The flavor profile already had plenty of sweetness from the potatoes and the cherries, and there was more than enough brightness from the lime. Not bad, but it all lacks depth. A deeper richness would really round things out, and for that two ingredients occurred to me. On the left above there’s a layer of peanut butter on the bottom bun, and on the right I went with avocado. Both are creamy and have plenty of fat, bringing that richness I felt was lacking. The salsa also hadn’t been as spicy as I’d like, so some hot sauce went on both sandwiches.

Ultimately, these weren’t spectacular. They were good, but some of the sandwiches I’ve made have really knocked me over, so it’s hard not to be a tad disappointed when something doesn’t gel completely. Maybe a different bread might have helped, the whole wheat kaiser rolls I had on hand were a bit dry and not so flavorful. Some sandwiches are a bit tricky to figure out, but luckily doing so is plenty rewarding.