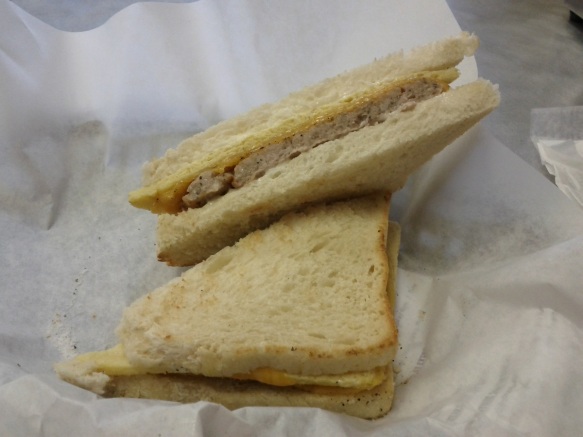 There is very nearly nothing special about this sandwich. A bit of breakfast sausage that tastes like every other bit of breakfast sausage you’ve ever had, a bit of cheese that’s too close to cloying, a bit of egg that isn’t quite flavorful enough to stand up to the other two. But. It was on fresh baked bread, and fresh baked bread goes a long way.

It doesn’t necessarily go far enough to carry an entire sandwich, mind you, and had this been good-but-not-great bread this sandwich would have been a real disappointment, and your humble enthusiast would be hollering about trying to coast on one good ingredient and how every piece deserves full consideration, et cetera. But. This was outstanding bread, friends, and on this particular morning, for that particular sandwich, that was enough.

It was sourdough, but I sampled the honey whole wheat and found it equally delightful. Warm, tender, flavorful, it had the kind of magic that only fresh-baked bread has. Resting an entire sandwich on that magic is a sizable gamble, but at Great Harvest Bread it’s paying off in spades.