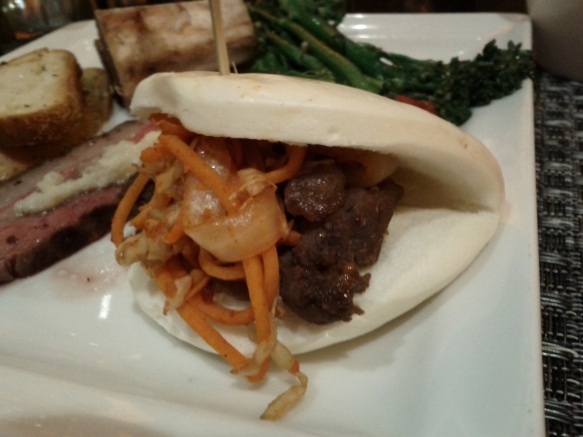 This is not my first “This is not a sandwich” post. Hope though I might, it is not likely to be my last. But, I can say with some certainty, I will never write one so heartbreaking. I found the above item on the buffet line at the Cosmopolitan hotel on the Las Vegas strip, a swanky joint pitching itself as the fashionable alternative to garish tourist traps. It was a fine buffet up until I reached the above, which I found sitting behind a sign that read, simply, “bánh mì.”

I’ve eaten a lot of bánh mì. Given that it’s roughly Vietnamese for “sandwich,” it’s only natural that there’s a good deal of variation between establishments, between sandwiches. It’s a big world. There is little room in it, however, for the nonsense featured above.

Look at it. Spongy bread more at home in a steamed bun, a bit of meat, a bit of carrot and daikon. And they have the nerve to call this a bánh mì. Where’s the baguette, the sandwich’s nod to its colonial roots? Where’s the cilantro? Where’s the sandwich, for crying out loud? What I see is little more than an ill-formed fusion taco, a poorly thought out gimmick, a monstrosity barely fit for a cooking channel reality show, a…I haven’t the words.

I want to stress something important: This is not pedantry. This is not the exclusive concern of the blogging sort of enthusiast. This matters. The bánh mì is in its infancy as a trend, but word is spreading. More and more people are hearing the good word and their finding their curiosity peaked. And what if some of those people should happen to find themselves on vacation, at a hip casino, enjoying the wares of a buffet featuring some quite good food? Well, they would try the bánh mì. And, finding the above, I can only guarantee their disappointment. Part of that is my fault; I’ve long praised the bánh mì with language both flowery and strident, and I accept my fault in this. But the above sandwich is not my doing. Someone’s going to hear about the bánh mì, they’re going to eat the above, and they’re going to say “That’s it?” It’ll be over for them, and that’s why this matters.

The bánh mì has brought me no small amount of joy, and it breaks my heart that some charlatan behind the line in Las Vegas might be taking that joy from person after person, day in and day out. It’s just…gone. Not lost, though. Stolen.