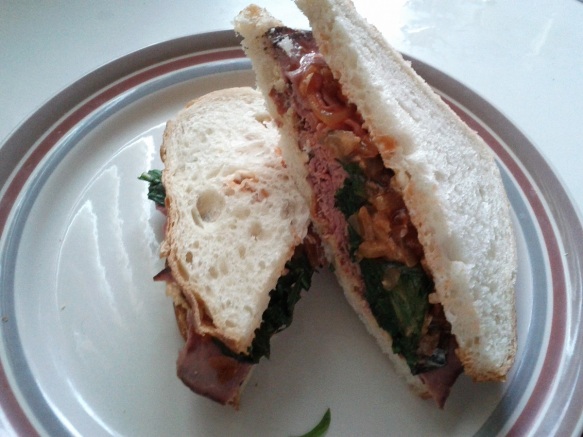 With an event to attend over the holiday, I happened to make up a batch of an associate’s smokey chipotle bacon pimento cheese, a dip based around smoked cheddar with two extra hits of smoke from the chipotle peppers and the bacon. It’s as good as its reputation suggests, and as I do with most delicious things my mind turned to how it might best fit in a sandwich. Another associate suggested some peppery greens, and from there I was off.

The cheese has a strong flavor, and I didn’t think just greens was going to be enough, so I included a decent (but not excessive) amount of sliced London broil (from the deli counter, not homemade.) That brought a flavor that was substantial enough to not be overwhelmed, but not so substantial that it would drown out anything else. The greens in question were sauteed dandelion greens, as I thought those might have the best chance of standing up to the cheese. A little hot dog cart style onion sauce added a note of sweetness, and the whole thing went between two slices of sourdough.

Because there’s no good reason to make one sandwich when two will do, I also put together a number with the same basic outline, but a few differences: the flavor on the meat went up, from London broil to pastrami. Accordingly, the flavor on the greens went down, from dandelion greens to broccoli rabe.

Overall, I think the dandelion greens are the winner here. Originally my associate had suggested arugula, and I think that level of pepper would also work, but I prefer the more assertive dandelions. It manages to push back against the richness of the cheese in a way that turned out to be crucial. The pastrami, while flavorful, just seemed to obscure the overall dynamic. Sandwiches, after all, are about harmony as much as they’re about anything else, and the pastrami just didn’t play right. Still, all in all a decent sandwich and one that was quite good is a fine result from a little leftover dip.

1 thought on “Meat, Greens and Cheese – Made at Home”