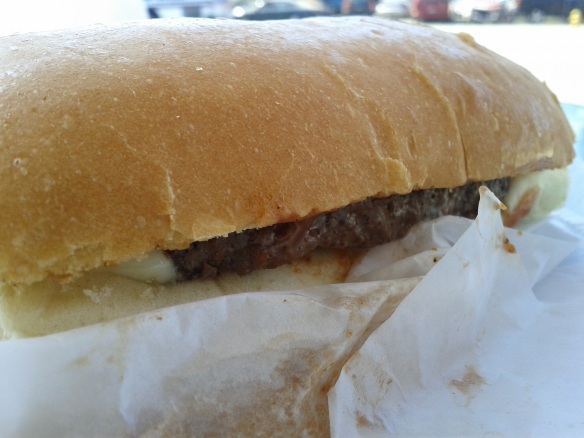 From one angle, it almost looks like a real sandwich. After all, a good number of sandwiches hide within their buns, and who knows what’s buried under the top shell of this sandwich. Well, let me show you:

I have, in my discussions about what does or does not constitute a sandwich, settled on what I feel is a clear definition. Two pieces of bread, something in the middle, designed, at least theoretically, to be eaten horizontally. I feel this is as expansive as the definition can be without being meaningless. Burger Bar, it seems, has aimed for the minimum. A large roll, a piece of cheese, a charred bit of meat, and a splash of BBQ sauce. That feels like an awful long list for such a meager item. Burger Bar is an anachronism, a roadside holdout from an era when there were a lot fewer roads. There’s a charm to places like that, and if you’re anything like me when you spot them they beg to be patronized. I expect a greasy sort of sandwich, something with a lax attitude towards heart-smart living but not…not the above.

I don’t know. I’m running out of ways to rant and rave about people who don’t give a care about the quality of their sandwiches. Look at the above and consider the mindset necessary to believe that it’s reasonable to charge another human being money for that. Consider the mindset necessary to believe it’s acceptable in any context, let alone a commercial one! If I made this sandwich for myself, at home, and no other human being was ever going to lay eyes on it, I’d still be embarrassed. I’d know that I screwed something up, something big, something like “what should go on my sandwich?” That, I dare say, is the single most important question one must answer when making a sandwich. As far as what goes into a sandwich, there is no more important issue than what goes in to the sandwich. But no so at Burger Bar! No, no, no at Burger Bar it’s all just good enough. Whatever is good enough. Nobody has to give a hoot, a cuss, a fig, or any other damn thing.

Enough. I gambled, I lost. Such is sandwiches, such is life. Next time I see a roadside joint I’ll say a quick prayer before I pull over.