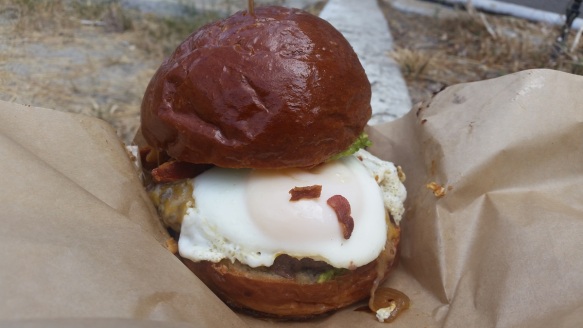 I will fully admit that I ordered this burger knowing roughly what I was getting, but I have a point that I needed to make, despite having made it before and knowing that I will feel compelled to make it again in the future. This Hamburger Is Too Big. It is two patties, cheddar and jack cheese, a fried egg, guacamole, and bacon. That’s not a bad lineup, but look at the thing. It’s lopsided upon arrival, stacked so large that it cannot be consumed in any spiritually meaningful way. It’s a bite of this, and a bite of that, and then a moment chasing around everything that fell out during the previous two bites, and then a moment to wipe one’s fingers, and then a moment to sigh, and then back to the burger.

Understand that this is not a categorical stance on hamburgers. One of the best sandwiches I’ve ever had was a hamburger. But something about hamburgers pushes people to go beyond the limits of good sense, and I cannot figure out what it is. I would suggest to you that that list of ingredients need not be a burger at all, but I am aware that a ground beef patty brings a savory depth some folk cannot do without. That’s fine. But why on earth are there two?

I feel a bit unfair singling out the Lobos Truck here. Needless to say, this is a problem one can find in burger joints both chain and local, upscale and down, anywhere and everywhere. I don’t know where this ends, but until that day I remain perplexed and disheartened.