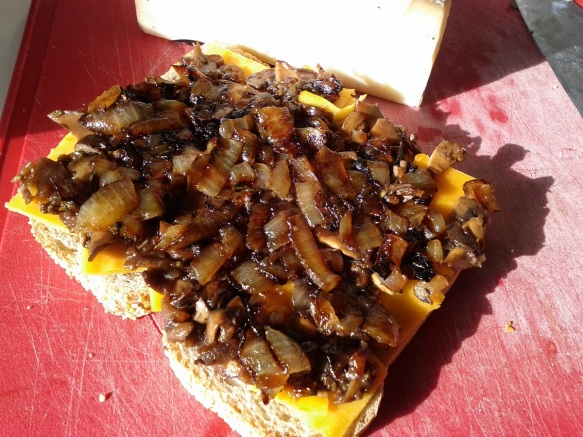 The whole reason this blog exists is that sandwiches don’t get the attention or respect that they deserve. Why not, then, turn my attention to ingredients that don’t get the respect or attention they deserve. I’ve featured a number of mushroom sandwiches on this blog, most of them quite delicious, but in my experience when most people go looking for sandwich ideas, mushrooms aren’t the first thing that come to mind. That’s a pity. I recognize that the above mass of sauteed mushrooms and caramelized onions isn’t going to appeal to everyone, but in the event that it doesn’t I’d say you’re missing out.

The above is two of the three layers in a grilled cheese sandwich, which feature what I would refer to as Drunken Mushrooms. The final product:

That’s a layer of extra sharp cheddar cheese on the bottom, the drunken mushrooms, and a layer of toscano cheese with peppercorns. The mushrooms were sauteed with onion until they were fairly well cooked, to which was added a bit of garlic and some rosemary. Finally, about half a bottle of beer was poured on, and the whole thing reduced until there wasn’t any loose liquid. That last bit is important, because soggy mushrooms are likely to ruin a grilled cheese. The bread involved was a dill rye bread, and I have to say that overall this was quite good. The toscano cheese is nutty and brings a nice depth of flavor, while the mushrooms took on an extraordinarily complex flavor from the reduced beer without losing their own, earthy essence. This was tasty, but making a good grilled cheese is a fairly low degree of difficulty, and in any case it’s more cheese sandwich than mushroom sandwich. I like mushroms a good deal, and they deserve more. 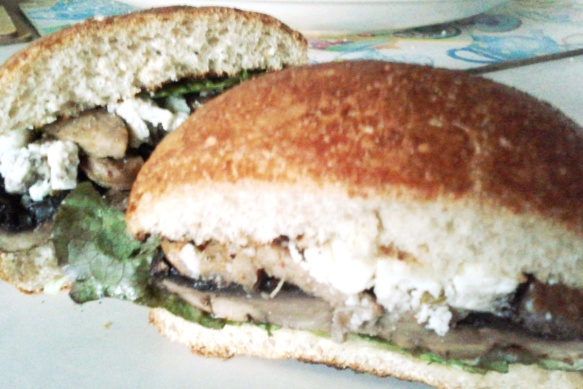 That’s a roasted portobello mushroom stuffed with Italian sausage and ricotta cheese, with a layer of red leaf lettuce added into brighten things up a bit. Roasting a portobello is little trouble: Cut a cross-hatch into the bottom, brush a little olive oil on it, put it into a 400 degree oven for 8-10 minutes, flip it and give it another 8-10. Take it out, stuff it with whatever you like, and put it back under the broiler until whatever you’ve got on top is melted or crisp or however it may be to your liking. I used pre-cooked chicken sausage here because I wanted to see how things would come out without going all out, how it might look if this was just something I ended up throwing together. The answer is about what you’d expect: good, but not great.

The portobello is the star of the mushroom sandwich world for a reason, beyond the fact that it stays on the bun much easier than the rest of its fungal brethren, it’s meaty and dense and packs a good deal of the umami flavor that makes mushrooms so good. The scoring and the roasting takes a lot of the moisture out of it, and that’s the key. All in all, I’m a bit disappointed in myself with this one. This could really sing with some pork sausage and some tastier cheese, or some chorizo and potato, or shredded chicken and roasted poblano chilies, or really any number of combinations. Instead I aimed for somewhere in the middle, ended up exactly there, and it was a bit lackluster. Little surprise.

(A note: I sliced the above for the purposes of the photo, but should you try your hand at this one don’t bother. Let the natural bowl of the mushroom work for you, and don’t open yourself to the risk of the whole thing falling apart.)

Back to the smaller crimini mushrooms, this sandwich is something like duxelles on rye. Duxelles is minced onion and mushroom, sauteed with herbs and more butter than is sensible until it’s something like a paste or mash. The incredibly rich, savory end product makes its most notable appearance in beef wellington, and in things like mushroom pithiviers but there’s really no reason it can’t be used to its own end. Here I paired it with red leaf lettuce and red onion, along with a layer of sweet mustard. This was quite tasty, although I would warn you that a light hand with the onion is required.

Ultimately, I’m quite satisfied with two of the sandwiches, and the third could be quite a bit better with a little more effort. That’s a decent outcome, but I know that there are other, greater sandwiches to be had down the road. I can only hope that when I find them I can give mushrooms the treatment they deserve.

From time to time esteemed members of the larger community of sandwich enthusiasts have a tale or idea too good to be kept to themselves or only shared privately. In these instances, On Sandwiches is happy to feature these contributions. In this case, Jon Bois says some things that need saying.

Do you like bacon? Don’t bother answering. I have suffered your memes, your retweets upon retweets sharing with the world that you are on #teambacon, your “bacon = FLAWLESS VICTORY” image macros. Stop for a moment and consider that you are not on a culinary journey, but rather are rolling through the same closed circuit.

Perhaps it does not interest you to create; perhaps you would simply do. Ultimately I must respect, and even celebrate, your “journey,” because your life is yours to live. Myself, I set upon a quest: to relegate bacon to a supporting role in favor of, of all things, a condiment.

That quest ought to sound odd to you, because it reflects an odd interest of mine: I am fascinated when a purportedly tertiary element steps into another role entirely. I like to watch pitchers bat. I enjoy reading about merry-go-rounds in Ghanaian playgrounds that generate electricity for their villages. I am amused to consider that of all the knives and saws and things that rest within this age-old pocket knife of mine, the utility of its scissors has outlasted them all.

I constructed a mustard sandwich that was decent enough to drag along some bacon with it.

Mustard is the greatest of condiments, and it’s also among the simplest to make. I did so with some brown and yellow mustard seeds, white wine vinegar, and salt, then scooped a liberal amount over some sauteed mushroom and poblano pepper. It was strong, which I prefer mustard to be, but not overwhelming. I was so pleased by how it played with the vegetables that I would have been perfectly satisfied to slam the door with the top slice of marbled rye and forget the bacon altogether.

No … no. It was time to humble bacon, to re-assign it under the command of a condiment. And so it did, with two crispy strips tangled through the mustard and vegetables. Indeed, the mustard starred, and the bacon, though its presence was welcome, provided no more than secondary saltiness and fattiness.

The sandwich wasn’t quite “great.” It was simply “good.” But I succeeded in taking this salty, shriveled mediocre-meme generator and reducing it to the least important component. You are on your thousandth lap under the bright lights; I am in the wilderness. Daybreak approaches. Will you notice?

I’ve had a can of refried black beans in my cupboard for some time now, and as I do with a great many food stuffs I periodically considered how they might best fit into a sandwich. The fine people at Scanwiches posted a particularly choice sandwich some time back, with black beans prominently featured. I wanted to take a crack at the idea, but wasn’t quite sure how to go about it. Finding a substantial piece of chorizo in the market one day proved to be enough to see my idea through. Refried beans may not be pretty, but black beans are the finest of all beans. Combine them with some sausage, I reasoned, would be a real hit. I brought along red onion and red bell pepper for a bit of snap, and a few thin slices of Oaxaca cheese finished things off.

I’m pleased to say I wasn’t wrong, though as you can see by the above my execution could have used a little work. The sandwiches were a little messy, with refried beans coming out of the side at points, and a red onion or two escaping here and there. The sandwich did pass the final test for messy vs. too messy, though. I was able to put the sandwich down for a minute, then easily pick it back up and resume eating. If something can’t survive a minute’s rest or a shift of the hands, it’s time to reevaluate the sandwich. But this did just fine, and despite the sloppiness was pretty tasty. The chorizo, pan seared then poached in a bit of wine, was spicy, full of delicious fatty juices. The black beans brought an earthy note to things, the bell peppers sweetness and the red onion a bit of bite. The cheese wasn’t lost, but it was definitely playing in the background. That’s why I like Oaxaca cheese. It’s light, unwilling and unable to take over the rest of a sandwich. There are some things I might do differently next time. A thicker roll could be hollowed out a bit, giving the beans a distinct position to hold. The red onion could stand to be sautéed, taking the bite down just a touch. But even without those changed, I was pretty pleased with how this came out. It was a fine sandwich I can recommended to you without reservations.