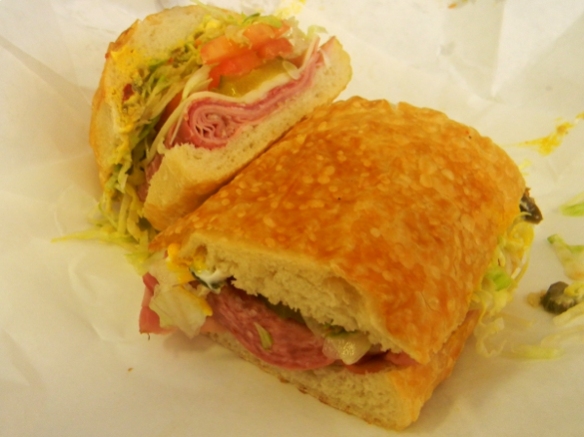 As I spent some time last week maligning Subway for their woefully inadequate bread, I thought it would be as good a time as any to talk about one of the better offerings out there. In the Subway post I mentioned that I can forgive people for crowing about great bread, and All About the Bread is certainly crowing. It’s in the name, of course, and they make sure to inform you that the bread is baked fresh every 30 minutes. I’m not exactly sure what that means. Am I getting the bread that’s fresh out of the oven? Do you take a batch, sell what you can in a half hour, then throw the remainder away and start fresh? While the specifics are hazy the implication is clear: This is fresh bread. As for the rest of what’s on display here, The Godfather is a pretty standard Italian sub. The ingredients vary a little depending on where you are, and All About the Bread features spicy capocollo, mortadella, prosciutto, ham, salami and provolone on the namesake bread. I thought it was OK, but enough of my associates proclaimed it too heavy on the mustard and hot peppers that I feel obligated to pass that information on to you. Considered apart from the sandwich, though, the bread was spectacular. The crust is marvelously crisp, having bubbled up into a crackly shell just waiting for your bite to smash through. The interior of the bread is soft and light, not tasteless but willingly playing a supporting roll to the sandwich. Although I would likely steer clear of The Godfather again, they offer a number of other sandwiches your humble enthusiast is anxious to pair up with that outstanding bread.

Recently I found myself without lunch and without the means or opportunity to go and get lunch. Because I live in America, there was a Subway nearby. So, I shamefully admit to you, I went and got a sandwich at Subway. That’s just the way things shake out sometimes. Last time I talked about Subway I had a very specific grievance with their Pulled Pork, but today I just want to talk Subway in general.

Subway sandwiches, as they are fond of reminding you, feature fresh baked bread. It isn’t really baking in any sense that you might imagine it, of course. Baking is the term for it, though, because they certainly aren’t making bread. A frozen stick of dough is thawed, proofed, and then baked. The smell drifts from the store and each and every little Subway can proudly boast fresh baked bread.

I don’t eat at Subway with any real regularity, and I’m never particularly pleased to be doing so, but I’ve eaten my share of Subway sandwiches. And I can say in all honesty that I have never once paused and thought to myself “you know, this is really good bread!” And the reason I have not thought that is simple: it isn’t very good! I could forgive Subway the boasting, I could forgive them any number of Quick Service Restaurant food prep techniques if the damned bread was any good, but it isnt! There’s no crust, there’s no body, there’s all manner of crap piled on top. Herbs, oats, parmesan, it all goes on top in a terrible inadequate attempt to camoflage the rest of the loaf. They display a wide range of types of bread, but they’re all the same where it counts. Put together a sandwich at Subway that would benefit from a soft, yielding crust and put together one that needs a sharp crunch. Sorry, you’re out of luck on both ends, the only thing that’s available is some silly middle of the road that doesn’t do anyone any favors.

I can forgive people crowing over great bread. And I can forgive just-ok bread if nobody tries to sell me on it. But taking the worst of both worlds and puffing your chest out over mediocrity is unforgivable. They take the sandwich consumer for a sap, arguing by assertion that their fresh baked bread is a delicious compliment to any sandwich. It isn’t true, it just flat-out isn’t true, and if there’s one thing I don’t like on my sandwich it’s a big fat juicy lie.