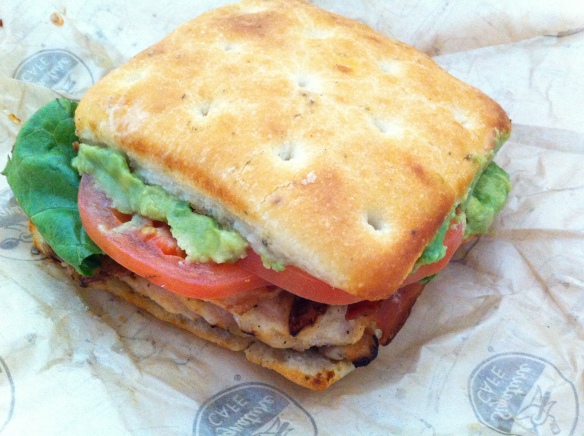 The made-to-order supermarket deli sandwich is, of course, something we have examined many times before at On Sandwiches. Today we explore another and question two things: storage and application of avocado, and abundance of the “large” sandwich.

Many sandwich shops and supermarkets, of course, offer avocado on sandwiches, either as a staple or as an addition at a customer’s whim. In most sit-down restaurants, the avocado will be freshly sliced and place on the sandwich. In many sandwich storefronts, however, the avocados will be pre-mashed for the sake of ease of storage and application. These are not so much “avocados” as “guacamole with one ingredient.” This is what was provided for my Chicken Bacon Avocado sandwich at Vons. It is understandable, although discouraging to the sandwich purist. Time is money, after all, and if it is simpler and more expedient to simply produce a #2 scoop of mashed avocado and spread it around the bread, why wouldn’t a manager or CEO (or whomever) make that call? While the sliced avocado is preferred, this is still something to take note of, and to think about when obtaining a sandwich with avocado. (Please note that although it has been a while since I have partaken of Subway, when last I was there, the avocado was still sliced to order; a somewhat surprising fact given the photographs of their menu items and the overall reality of the franchise.)

The second point I want to address here is at what point offering a “large” sandwich becomes unnecessary. What you see above is a perfectly acceptable sandwich. Unfortunately, I ordered a “large” version of this sandwich, which — due to the nature of the focaccia bread on which it is served — resulted in the counter employee simply making two of the above sandwich and wrapping them separately. I would argue that this is not a large sandwich. This is, in fact, two of the same sandwich. Again, perhaps I am a stickler of semantics here, but these are not the same thing.

The sandwich(es) was (were) actually quite good. Nothing revolutionary, of course, but all the flavors married well and added up to a satisfying experience. And then, of course, I had to eat another sandwich. 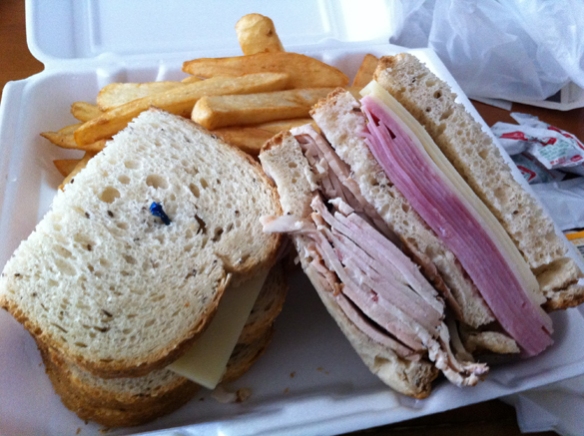 It’s no stretch to say that I’m not exactly the most observant person. Still, I’m always very pleasantly surprised when I notice a new sandwich establishment tucked away in some corner I had hitherto never spotted. Such was the case when I happened to walk by the storefront of Billy’s, which was partially obscured by construction. When I went inside, I was overjoyed to find a legitimate delicatessen and restaurant, complete with sliced-to-order meats and cheeses and black and white cookies.

I looked the menu over and selected the No.9, which was a sandwich with turkey, Swiss, and ham on rye. I got the whole shebang to go, and when I got home, I found all manner of packets included with my sandwich: ketchup, mayonnaise, deli mustard. I dug into the sandwich and experienced the unmistakable flavor of recently-cooked and freshly sliced turkey breast. Phenomenal. The rye was hearty and rich in flavor. All in all, the sandwich was very pleasing, especially considering my having stumbled upon it quite accidentally. Only in looking the menu over again do I notice that this sandwich was meant to have included “Billy’s Dressing.” There was no trace of any such dressing on my bone-dry sandwich, and I selected a packet of mustard and half a packet of mayonnaise to augment to meal. I will have to revisit Billy’s soon and insist on the inclusion of the promised dressing. Only with the knowledge of this missing component do I find the experience sorely lacking in hindsight. But c’est la guerre.

In recent weeks I have encountered some less-than-ideal sandwich offerings. This week, I’m happy to bring you a different sort of tale.

On an inordinately rainy Los Angeles evening, I set out for a music venue, with hopes I may find a sandwich establishment before the beginning of the concert. The streets of West Hollywood were flooded, and roads closed due not only to the downpour, but also as a result of some sort of police manhunt. By the time I reached the block for the venue’s parking structure, I was only too happy to surrender my car to the valet and stop driving. I set out on foot in search of a place to eat. I headed two blocks west, but the heavy Boulevard left its businesses behind and became housing. I turned back around and headed east, hoping I wouldn’t have to resort to the upscale Japanese restaurant across the street. After another two blocks I spied, just up ahead, the familiar Boar’s Head logo in a storefront window. To my great delight, I had discovered Sunset Deli.

This was an oasis of a sandwich shop. Priding themselves on their Boar’s Head-only meats and cheeses, they offer a wide range of sandwiches for hungry roamers like myself. I selected the Odies Hoagie, a curiously-named sandwich that features bacon, Black Forest ham, honey maple ham, “deluxe” ham, mayo, spicy mustard, lettuce, tomato, and onion on a white French roll. The ham, as in the photo above, is truly “piled high” unlike many establishments that make the same boast. After the first bite, I was in heaven. The true appeal of deli meat sliced thin is that it feels like light fare. The different type of ham blended together to provide definite substance, yet didn’t feel like I was eating an enormous meal. I settled in with a great sandwich and a great book and took shelter from the storm.

Post-script: another item on the Sunset Deli menu caught my eye, and has captured the imagination of both myself and the esteemed founder of On Sandwiches. Stay tuned in the coming months for what may be the first On Sandwiches Special Event. 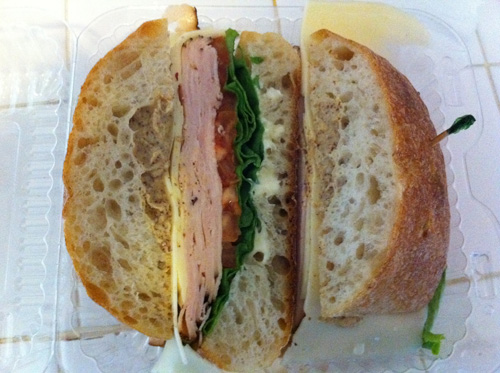 Gelson’s is a chain of upscale supermarkets in Southern California, specializing in fresh foods and upscale tastes. Imagine a more mature and dignified Whole Foods, but geared towards 50-somethings rather than 30-somethings.

The Gelson’s deli section is home to perhaps my favorite salad dish on earth, but they have an enormous selection of Boar’s Head meats and cheeses, standing at the ready for patrons to select either by the pound, or to build their own sandwich, selecting from a smaller selection of breads and accents. For those less finicky, the deli section also offers three to four “ready-made” sandwiches for a smaller fee; meat, lettuce and tomato on bread, to which they will add your choice of condiments and cheese before wrapping the enterprise up for you.

I selected the honey roasted turkey on ciabatta, to which I added baby Swiss and what Gelson’s had listed as “Dijon” mustard. This latter proved to be the downfall of both myself and the sandwich.

As most sandwich practitioners and enthusiasts can attest, Boar’s Head makes quality, consumer-grade meats and cheeses, and the honey roasted turkey and baby Swiss were both outstanding. Shockingly, it was the mustard that ruined this sandwich – something I was previously unaware with anything short of the foul yellow paint that emerges from a squeeze bottle. The Gelson’s “Dijon” was actually coarse stone-ground mustard with intense heat, and applied with a decidedly uneven hand. It completely overwhelmed the subtle and delicate meat and cheese. What’s more it separated from the rest of the sandwich. Every other bite would be chock-a-block full of the mustard, which would land straight on my tongue, burning, as I chewed the rest of the sandwich around it.

Amazingly, this was a sandwich that would have benefitted from mayo, no mustard. Let this serve as a reminder to fans of mustard that, foremost, there is such a thing as “too much,” and secondly,  to pair your mustard carefully with the main ingredients, lest they be lost in the shuffle.