The last time I had a porchetta sandwich it was the high-wire act of nothing but meat and bread. Not so at Gjelina, where the porchetta joins rosemary, fennel, garlic, salsa verde, and arugula on a bialy. I’ll cut to the quick here: this was fantastic. Perhaps top-10 fantastic. Bialys are rare in Los Angeles so it’s a delight not just to find one but to find a good one, with all the crunch that comes from the bagel’s non-boiled cousin. The pork is exquisitely prepared, savory, rich and crunchy. The garlic, rosmary and fennel are an aromatic, herbal delight, and the salsa verde brings enough heat to bump up the rest of the crew. This was rather modest in size and not quite so modest in price, but such things are to be expected in Los Angeles. That said, I think the size is just right. I’ve dug into some really rich sandwiches only to find myself overwhelmed less than halfway through, and I’ve come across more than one rube who thinks that if some is good than surely too much must be great. There’s a restraint at work at Gjelina and the result is a finely tuned sandwich, delicious from first bite to last.

Gjelina is either an exceptionally lucky establishment, or someone there is a wizard. Out of the more than 400 establishments I have patronized, I have never had a sandwich as well constructed as that one. The taste was fine, flavorful tuna, peppery arugula, sweet roasted red pepper and caper aioli is a well-balanced lineup. But the sandwich stayed together from first bite to last, never shifted much, there was absolutely zero filling creep, and each bit of crust was robust but yielded just before the dreaded clamp-and-tear had to be applied. I consider a sandwich successful if it hits even a few of those marks, but to hit all of them is some kind of magic. I’m genuinely unsure of how much credit to award Gjelina because I’m not sure how much of this can be achieved on purpose. How much control does their baker exert over the density of the crust? The air was not especially humid but the ocean wasn’t far; could this same sandwich come together in the inland empire? This is not, I suspect, a question with an answer. No matter. This was a fantastic sandwich, and that much is certain. 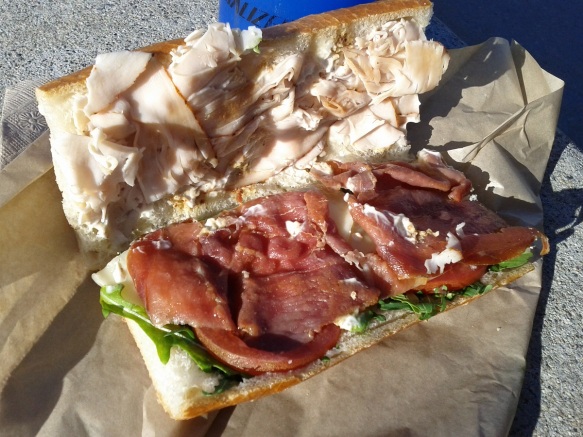 Apologies for the wide-open shot, but the Mr. Electric didn’t come sliced and didn’t look like much from the side. But open it up and you get a clear look at exactly what makes this sandwich work: crispy prosciutto. The Mr. Electric is sliced turkey, prosciutto, avocado, provolone, pickled jalapeno, baby greens and tomatoes on a baguette, a lineup that could easily be something fairly pedestrian, were it not for the crisp on the prosciutto. It gave the sandwich a crunch it wouldn’t otherwise have, and together with the richness of the avocado and the saltiness of the prosciutto, things were well balanced and tied nicely together.

I’ve reviewed hundreds of sandwiches here by now, and if I’m totally honest this one seems destined to slip into the archives, never to be mentioned again. But before it goes I’d like to use it to draw attention to the slim gap between something like “pretty good” and something like “meh,” an ugly little word that nonetheless offers an honest assessment of much in life. This sandwich was only good because someone took the time to crisp up one of the ingredients, and it makes me wonder about every sandwich that’s ever failed to impress me. Did they all lack just one thing, some small change I couldn’t quite see? How far were they from what they could be, and how did they not make the step? How many of them are there, forever cemented as lost opportunities? No matter. This one was not, and all the more delicious for not being so.

On more than one occasion, both on this site and elsewhere, I have summarized a sandwich as “10/10 concept, 2/10 execution.” This is simply my preferred way of saying that something is a good idea but whoever executed it fell short. Although I hadn’t given it much thought, prior to eating at Gjelina Take Away, I would have been skeptical that the inverse was possible. 10/10 execution, 2/10 concept? If it’s such a poor concept, surely carrying it out can’t bring high marks. I’m still not sure if such a thing is possible, but if it is you’ll find it pictured above. Beef brisket on a bánh mì is not something I would have come up with, and I would argue that that’s for good reason.

Lots of things can and do go onbánh mìs, with a variety of flavor profiles resulting. That said, they tend to have commonalities between them, usually in the form of…well, Vietnamese flavors. I’m not sure an enjoyable bánh mì is possible without that, and the brisket bánh mì wasn’t encouraging. The beef was awfully rich and seemed bland in comparison to the kind of thing I’m accustomed to in a bánh mì, and overall the sandwich lacked a brightness that a good bánh mì has in spades. The brisket was just too much, and the cilantro wasn’t up to the task of reeling it in.

All of that said, this sandwich felt like exactly what it was intended to be. The brisket was tender and juicy, the vegetables fresh, present in sensible proportion, and the baguette had a tremendous crust. In short, 10/10 execution, 2/10 concept. 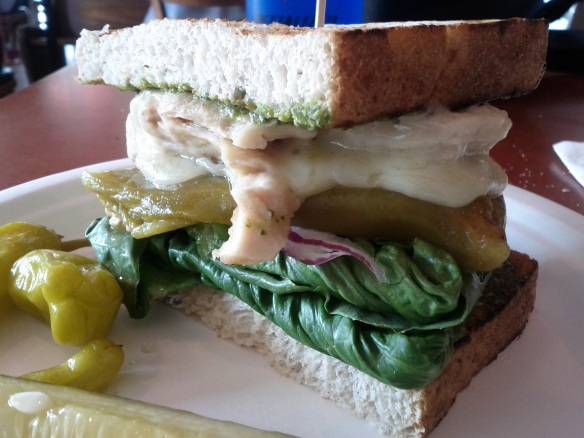 At first glance, the Gasol chicken sandwich seems like an incongruous lineup: chicken with melted swiss, roasted green chili, pesto,lettuce and red onion. But notice that it lacks tomato, a clear signal that this wasn’t quite thrown together. Of course, just because something is given a bit of thought doesn’t mean it’s going to work well. As it turns out, the Gasol chicken works quite well. The lettuce is plentiful enough to be an ingredient rather than an afterthought, and combined with the roasted chili and the pesto there are some fresh, bright veggie flavors that pair well with the chicken and the cheese. So what at first appeared to be a disparate gaggle of ingredients turns out to be a harmonious bunch indeed. That’s the magic of sandwiches, I suppose, and I dare say we’re all much better off for it.