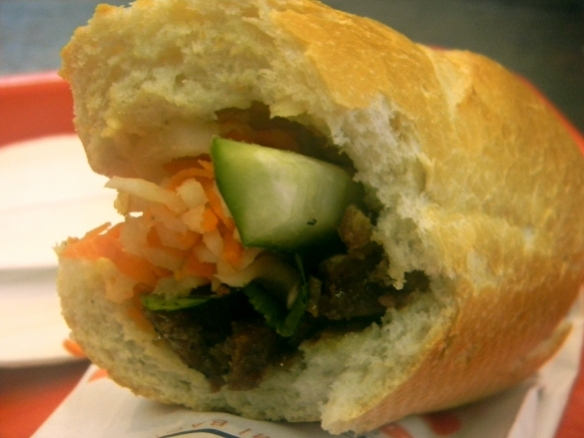 When I first started writing about sandwiches, I had a handful of big ideas I wanted to talk about. I knew I had thoughts about cheese, about cold cuts, about balance, and other topics of major importance, and I wanted to share those thoughts. These large ideas were spaced out as the site developed, partly because of the sandwiches I was eating but partly because I was afraid that I was going to run out. Once I’d put forth those big ideas, what else was there to talk about? This is something that plagues any commentator, I suppose, or any creator of content. But my expectations proved to be unfounded; the more I’ve said about sandwiches, the more I’ve discovered there is to say.

What I have planned for the month of January, though, needles at the confidence that I have developed. I intend to spend the month of January talking about the bánh mì sandwich and only the  bánh mì sandwich Its specific examples, its larger concepts, the questions it raises, and the answers it inspires. What I am driving at above, though, is that I’m not sure how this is going to go. There are a lot of different bánh mì sandwiches, but they’re all built in essentially the same mold, and I’m not sure how long I can go before posts are entirely “This ham was not as good as other ham. This cucumber isn’t as good as another cucumber I once had.” That level of discourse may fly elsewhere, but we at On Sandwiches believe you deserve better than that. Compounding this issue is that I often lean towards ordering the bánh mì thịt nướng. It’s the best sandwich, and if I’m comparing one establishment to another it seems only fair to compare their respective takes on the same item. So expect to see thịt nướng featured more than a few times over the next month.

Enough with the hand wringing. A month of bánh mì starts tomorrow, challenges be damned. I’ll do my best to find the limits of discourse, and we’ll go there together.

I believe sandwiches do not get what they deserve. As an entire category of food confined largely to a single meal, sandwiches get neither the respect nor the study they deserve. Not too long ago I thought about this and decided that something should be done. There should be a place where someone can look between two pieces of bread, examine what is there and ponder what ought to be. A place where each ingredient is considered on its own and in its relation to the larger piece. A place where someone can speak on sandwiches.

And so here we are.