Community is a restaurant in Los Feliz with no small reputation, and the OMG Lamb sandwich is another example of my faith in the top of the menu. It’s not an infallible rule, but generally speaking, whatever’s listed at Number 1 is likely to be a pretty good bet. I find it to be the item most labored over, the one that started someone dreaming. I don’t know if that’s the case with Community and to be honest…I hope it wasn’t. the OMG Lamb sandwich is good, quite good, but it doesn’t feel revelatory. In short, it isn’t OMG. Well marinated lamb joins cucumber-tomato salad, dressed greens and jalapeno yogurt, on ciabatta, slices so thin as to be flatbread. The lamb is juicy and well prepared but the dominant note of the sandwich is pepper, present with the lamb and echoed in the yogurt and overall there wasn’t much past that note. I’m being picky, because as I said this was quite good. But I’ve been at this long enough that I have to be picky and besides, I’m not the one making divine promises.

The lamb burger at Alcove is a fairly straightforward affair, ground lamb, kalmata olives, herbs, goat cheese and an olive tapenade. It also includes a ramekin full of mayo and whole-grain mustard, which I found benefited the burger to a good degree. A lamb burger is sort of a pass/fail enterprise, where you’ve either done things right and it’s a flavorful, herbal affair, or you’ve overdone it and it’s tough and bland. The folks at Alcove get it right, and the olive/goat cheese/olive combination is a bold affair but one that works.

This was good, but I couldn’t help but wonder something that raises a larger question about hamburgers: Would this have been better as a lamb sandwich? There’s no specific need for this to be a burger (over, say, roasted and slice or shredded) other than ease of preparation. I sympathize with the establishment on that front, but ultimately this is On Sandwiches, and not On Efficiency. I’m after the Best Possible, and I’m not sure that’s what I got. 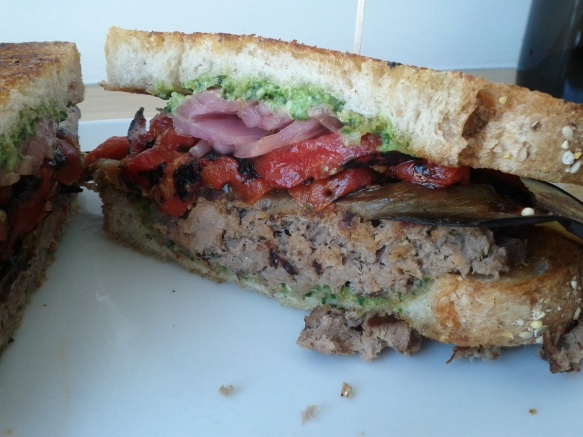 Back to Fundamental LA, this time for something new to the menu. Gone is the short rib sandwich, and in its place is braised lamb with eggplant, arugula pesto, roasted red peppers and pickled red onion on grilled sourdough. Compared head to head the short rib is a bit more adventurous, but there are things here to enjoy. The pesto went down on both the top and bottom of the sandwich, preventing the flavor from being lost. Overall the flavors work well together, and pickled red onion with roasted red peppers is a pairing that doesn’t show up often enough.

It wasn’t without its issues. Given that the eggplant was given second billing I expected quite a bit more of it, but it’s just a few slim slices, much to the sandwich’s detriment. The lamb was a touch dry, but I imagine that’s something that varies from day to day. All in all, Fundamental LA keeps up the effort as one of the stronger places for lunch in or around Westwood, and the next time the menu gets something new I won’t hesitate to give it a go.

Recently I took to polling associates via Twitter about what manner of sandwiches they might like to see, and brie was one of the answers that came back. That sounded like a fine idea to me, and after a bit of thinking I had two ideas ready to go.

The first, seen above, is a simple sandwich of roasted garlic, red lettuce, slices of roasted portobello mushroom, and brie. The brie was softened a bit and spread on the top half of the bun, and a layer of roasted garlic went on the bottom half. This is one of those straightforward numbers that’s either going to sound good to you or it isn’t, and little I say can sway anyone in one direction or the other. If you like mushrooms, this is outstanding. The portobello is its meaty, delicious self, the roasted garlic is sweet and subtle, and the tangy brie sets off the other two flavors quite nicely. The final sandwich had a bit more brie than what you see above, because I started with a moderate amount in hopes of avoiding an overwhelming presence. I’m no great cheese booster, and so I prefer a careful hand. If you love the stuff, by all means pile it on.

The second sandwich I put together is a bit more complicated. Technically speaking, it’s boulettes d’agneau avec espagnole et brie, which is to say it’s a meatball sub, except the meatballs are made of lamb, the sauce is brown sauce, and the cheese is brie. This, friends, was outstanding. I buttered the bread and put it face-down in a skillet before assembling the sandwich, and this was the touch that walked the sandwich just to the edge of too much. That I had the meatball sub archetype to guide me helps, as it kept me from piling on ingredients that would have done little but turn a lovely ensemble into a cacophonous chorus.

The lamb isn’t subject to much, just a little cumin, garlic, salt and pepper before being browned in a skillet and put into the oven. The sauce is the standard mother sauce formula of mirepoix, roux, brown stock and spices. The brie is the brie, and all together that’s a recipe for something that is very nearly too rich, but in the end just right. This was a delight, the bite of the brie cutting through the rich notes of the other ingredients, the savory presence of the lamb and the sauce pulled back just enough. (This sandwich also featured more brie than pictures, for the same reasons mentioned above.)

Not every sandwich I make is a success, and I’m happy to own up when something doesn’t turn out as well as it could, but I’m also not embarrassed to announce when I’ve got something that works. This is a fine, fine sandwich.