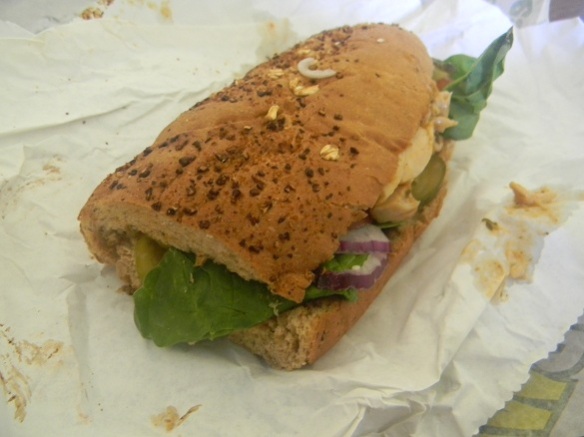 Recently I found myself without lunch and without the means or opportunity to go and get lunch. Because I live in America, there was a Subway nearby. So, I shamefully admit to you, I went and got a sandwich at Subway. That’s just the way things shake out sometimes. Last time I talked about Subway I had a very specific grievance with their Pulled Pork, but today I just want to talk Subway in general.

Subway sandwiches, as they are fond of reminding you, feature fresh baked bread. It isn’t really baking in any sense that you might imagine it, of course. Baking is the term for it, though, because they certainly aren’t making bread. A frozen stick of dough is thawed, proofed, and then baked. The smell drifts from the store and each and every little Subway can proudly boast fresh baked bread.

I don’t eat at Subway with any real regularity, and I’m never particularly pleased to be doing so, but I’ve eaten my share of Subway sandwiches. And I can say in all honesty that I have never once paused and thought to myself “you know, this is really good bread!” And the reason I have not thought that is simple: it isn’t very good! I could forgive Subway the boasting, I could forgive them any number of Quick Service Restaurant food prep techniques if the damned bread was any good, but it isnt! There’s no crust, there’s no body, there’s all manner of crap piled on top. Herbs, oats, parmesan, it all goes on top in a terrible inadequate attempt to camoflage the rest of the loaf. They display a wide range of types of bread, but they’re all the same where it counts. Put together a sandwich at Subway that would benefit from a soft, yielding crust and put together one that needs a sharp crunch. Sorry, you’re out of luck on both ends, the only thing that’s available is some silly middle of the road that doesn’t do anyone any favors.

I can forgive people crowing over great bread. And I can forgive just-ok bread if nobody tries to sell me on it. But taking the worst of both worlds and puffing your chest out over mediocrity is unforgivable. They take the sandwich consumer for a sap, arguing by assertion that their fresh baked bread is a delicious compliment to any sandwich. It isn’t true, it just flat-out isn’t true, and if there’s one thing I don’t like on my sandwich it’s a big fat juicy lie.

Well meaning friends and associates have, in the past, suggested I write about subway. Each time I have declined to do so. The topic is a challenging one for me, a point where my passions intersect with a sincere desire to minimize snobbishness. I fear I cannot address the topic in a rational, restrained manner. But my esteemed colleague is addressing pulled pork sandwiches soon and I have felt a certain dismay over Subway offering one, so the time has come.

Let’s start with the sandwich. I’m a man who thinks that things have rules. They can (and should) be bent or even broken, but always for a good cause. Here’s a rule: pulled pork comes on white bread. Sliced loaf, roll, that part doesn’t matter, it just has to be white. The
point of a pulled pork sandwich is to savor laboriously prepared pork and (ideally) a sauce with a history. The bread should say as little as possible.

Subway doesnt have white bread. They have honey oat, the have 9-grain, they even have a Hearty Italian that might be close, but no straight white. So when the sandwich artist asked me what kind of bread I wanted, the first step in any Subway sandwich, I was at a bit of a loss. Ideally, this wouldn’t even be a choice. I ordered a pulled pork sandwich, white bread should be available and they should know to use it. Thinking that the “hearty” in Italian might be too much, I went with sourdough.

The pork sits in a small tray like any other ingredient. A portion of pork was scooped out and placed on my sourdough, and then I was asked what kind of cheese I wanted. Cheese? What kind of cheese did I want? I was struck. If the bread is a slip-up, cheese is heresy. I try to remain open to all ideas but I cannot accept this. There is no cheese in a pulled pork sandwich, full stop. It doesn’t belong and it’s presence will only hurt the sandwich. I declined cheese, but who knows what everyone else is doing. By now I could have had BREAD and CHEESE, a ghastly pair to bring to a pulled pork sandwich. “So what?” you ask. “Why not try it?” Because it won’t be any good. Because some questions
have been asked and answered. You respect that people have eaten a lot of lousy sandwiches by accepting their conclusions. Pulled pork goes on white bread and it doesn’t involve cheese*.

More of the same followed as I was asked what toppings I wanted. The rules are more loose here. There are different things you can try, but there are limits. Coleslaw is a fine thing to add, sliced cucumber is just weird. I opted for a bit of red onion and said that was enough. I got a strange look for being satisfied with a sole topping. A few days after eating the sandwich I looked closer at an advertisement.

Look at all that lettuce! A good pulled pork sandwich is a savory, chewy affair. A bed full of watery shreds isn’t needed, it isn’t needed in the slightest. I’m left shuddering with thoughts of pulled pork with mounds of lettuce, limp tomatoes, banana peppers and god knows what else. How does the line go? It was not my strength that needed nursing, it was my imagination that wanted soothing. Next came the sauce, dispensed from a squeeze bottle like every other subway topping. You can see this is how the sandwich is represented in the ads, with a layer of sauce on top.

This is also less than ideal. Tf you’re going to involve sauce, toss the meat in it. The pork obviously isn’t prepared in house, so an additional bit of adulteration is only one more on the pile. (It occurs to me that they might avoid adding sauce to give you the option of
adding something like their chipotle southwest sauce. Oddly enough I would be ok with that, because at that point youve got a chipotle pork sandwich and I don’t care what the hell you do.) This is a pulled pork sandwich in the classic barbecue pulled pork sense, and tossing the meat in the sauce would be the best option.

The most important question here, apart from all of my uptight ranting, was whether or not the sandwich was any good. It was…it was alright. The pork was juicy enough, the sauce could have used less sugar and more smoke. I didn’t hate it but I didn’t love it. Meh.

There are a lot of subway restaurants. To foster growth, Doctor’s Associates was willing to accept a lower franchise fee than other major franchisors, and they were willing to put franchisees closer to each other than might seem wise. This was intentional, they had a goal of having more subway than there are mcdonalds and they achieved that goal. But this is not an abstract,”hey did you know” point. The hack jokes people told about Starbucks are accurate descriptions of subway and this has consequences. If you’re so hung up on being the biggest, being the best is an afterthought.

Subway doesn’t make terrible sandwiches. I think they’re pretty salty, but they aren’t outright bad. But they aren’t good either, and there is no worse place to be than the middle of the road. I can forgive aiming high and falling short, as in the Mad Maple at Joe Davola’s. But I cannot forgive lack of effort. I used “meh” for a reason. It represents a deliberate unwillingness to care, a 21st century rejection of enthusiasm. It is the perfect summation of Subway. There is no greater sin than being boring, and this was a boring sandwich.

This, in and of itself, isn’t worth getting worked up over. There are scads of mediocresandwich shops; long winded rants about each one wouldn’t be interesting to read or write. But Subway is ubiquitous. For a lot of people, Subway is sandwiches and that is what I cannot stand.

Subway is aiming above boring. A pulled pork sandwich is a departure for them, as is the recent promotion of the turkey with avocado. But they’re setting out to make these sandwiches with the same pattern, skills and effort they bring to everything else. Honey oat bread, add swiss cheese, dump the sauce on top. If it was good enough for the sweet onion chicken teryaki, it’ll be good enough for everything else. Meh got them here, and meh shall carry them through. This is the middling effort I cannot forgive. If you aren’t going to do pulled pork right, don’t bother. Spare us your sputtering attempt. Stick to ham and swiss, the Italian BMT. We’ll find pulled pork elsewhere.

*This argument ignores the grilled cheese with pulled pork that has become popular recently because that’s a grilled cheese first and the pork is not the central element as it is here.