How good is half of a great sandwich? Not half as in sliced down the middle, as so many sandwiches are, but half in incomplete, lacking. That’s the question that confronted me at Ô Bánh Mì. They have a Friday special consisting of recently roasted pig, and I have to say as far as that goes it’s stupendous. It comes with jus and it’s unbelievably rich, and the tender pork is perfectly met with crispy skin. Anyone starting with that is well on their way to an outstanding sandwich, I figured, but that’s the rub: on their way.

I have long extolled the virtues of the bánh mì, and I have done so at length. The reason I love the sandwich so much is that I believe it to be the perfect example of what a sandwich can be. A good sandwich is about balance and harmony; it can’t have too much of any one thing, and it all has to work together. A central filling, pickled daikon and carrot, cilantro, jalapeño, cucumber and the wonderfully buttery Vietnamese mayo. It balances savory and sharp, richness and spice, sweet and tang. Often found on really great bread, a well-made bánh mì is perfect.18

But what if it’s not well made? What if, like the above, it is completely devoid of pickled vegetables and cucumber? What if some establishment had decided that their pig roast was so great the rest of the sandwich was superfluous? Well, friends, I put it to you that you’d be left with a sandwich that wasn’t really all that great. A sandwich, after all, is to be considered as a whole. In that light, I hesitate to endorse the above. It’s genuinely great pork, but long time readers will know that there’s little that cuts at me worse than a sandwich driven to mediocrity by a halfhearted effort. It didn’t have to be this way, I want to cry. This could have been a great sandwich. 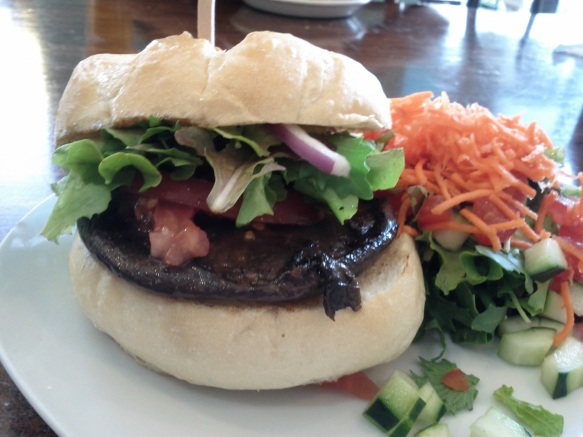 I’ve reviewed a fair number of vegan and vegetarian sandwiches on this blog, and if you dig into the archives you’ll find vegan reviews from a most trusted associate. The reason I do this is actually quite simple: they’re often delicious. At many establishments these sorts of sandwiches are shunted off into their own little corner of the menu, all too easy to ignore. Don’t make that mistake; go looking for meatless options, consider them, and I wager you’ll find a reward is quick in coming. Such is the case with the above, a marinated, grilled portobello mushroom with some white bean hummus. Sure, there’s a cursory bunch of lettuce and a slice of tomato with a bit of red onion, but this is really a two-note song. That’s a difficult thing to pull off, but if you’re surprised that it works I’d wager you haven’t dined on mushrooms recently. It’s a dense, rich flavor, one done a disservice by the frequently-applied “meaty” label. The umami notes that are so present in meat are present in well-prepared mushrooms, but it’s its own food. Let it be so, and enjoy it for such. While the mushroom was the standout here, the hummus was a bit sparse in application. That’s especially unfortunate in that what was there was quite good, garlicky and rich in its own right. I appreciate an establishment watching out for excessive filling creep, but not at the cost of the sandwich overall. This was quite good, but with a little more hummus it could easily have been great.

Community is a restaurant in Los Feliz with no small reputation, and the OMG Lamb sandwich is another example of my faith in the top of the menu. It’s not an infallible rule, but generally speaking, whatever’s listed at Number 1 is likely to be a pretty good bet. I find it to be the item most labored over, the one that started someone dreaming. I don’t know if that’s the case with Community and to be honest…I hope it wasn’t. the OMG Lamb sandwich is good, quite good, but it doesn’t feel revelatory. In short, it isn’t OMG. Well marinated lamb joins cucumber-tomato salad, dressed greens and jalapeno yogurt, on ciabatta, slices so thin as to be flatbread. The lamb is juicy and well prepared but the dominant note of the sandwich is pepper, present with the lamb and echoed in the yogurt and overall there wasn’t much past that note. I’m being picky, because as I said this was quite good. But I’ve been at this long enough that I have to be picky and besides, I’m not the one making divine promises.

The lamb burger at Alcove is a fairly straightforward affair, ground lamb, kalmata olives, herbs, goat cheese and an olive tapenade. It also includes a ramekin full of mayo and whole-grain mustard, which I found benefited the burger to a good degree. A lamb burger is sort of a pass/fail enterprise, where you’ve either done things right and it’s a flavorful, herbal affair, or you’ve overdone it and it’s tough and bland. The folks at Alcove get it right, and the olive/goat cheese/olive combination is a bold affair but one that works.

This was good, but I couldn’t help but wonder something that raises a larger question about hamburgers: Would this have been better as a lamb sandwich? There’s no specific need for this to be a burger (over, say, roasted and slice or shredded) other than ease of preparation. I sympathize with the establishment on that front, but ultimately this is On Sandwiches, and not On Efficiency. I’m after the Best Possible, and I’m not sure that’s what I got.

Storefront Deli is another establishment with more than its fair share of hype, and the reputation is not entirely undeserved. It’s run by the same people responsible for Salt’s Cure, which I understand to be a fine restaurant that routinely puts out all manner of delicious, exciting food. Storefront Deli, as the name indicates, is an attempt to give that spirit an everyday sort of veneer, to make a supremely innovative potato salad available all the time, on demand. The ingredients are lovingly sourced and even more lovingly prepared, with plenty of house-cured this and that. In the Mousa’s case it’s salami cotto, bologna, sopressata and provolone on a fairly-soft roll with hots, red onion and lettuce.

This is a very good sandwich, and it costs $12. Sandwiches in Los Angeles are expensive relative to a lot of other places, and there have been plenty of sandwiches on this blog that cost that and more where I haven’t found the price worth mentioning. It’s worth mentioning here, though, for the very simple reason that this sandwich is almost certainly not worth $12.

Some time ago I covered what I consider the platonic ideal of the grinder, and this sandwich should not be confused with that one. This one is dealing with more subtle flavors, putting forth a much smaller serving and asking the consumer to pay attention to the details. Those details are exceptionally well crafted, and the result is likely as good as this sort of sandwich is likely to get. But they’re still just cold cuts. Some associates may disagree with me on this, but at the end of the day bologna is still bologna. The ceiling on lunch meat just isn’t that high, and that isn’t likely to change despite the efforts of well-intentioned artisans.

So the thing is that the $12 price may be entirely justified. It may even be necessary—making money in the restaurant game is no small task, and I begrudge no one their need to set prices where they need to in order to succeed. With the highest-quality meats being brought in, and much time and care put into their preparation, it seems reasonable to me that this sandwich would be more expensive than a similar sort of sandwich that doesn’t have the detailed quite so well thought out. But the question of whether or not the price is justified has to come second to the question of whether or not it’s worth it. In my estimation, it’s not. All the care and attention in the world does not save cold cuts from being cold cuts, and if all that care and attention means you end up with a $12 sandwich, I’l be seeking my sandwiches elsewhere.

The last time I had a crab cake sandwich, I found it a bit plain. A lightly dressed slaw was one of the things I suggested might improve things, so I was happy to see the crab cake sandwich at Alcove came with just that. Beyond the slaw, though, there wasn’t a whole lot to get excited about. It wasn’t a bad sandwich. There was plenty of fresh crab in a well fried (perhaps overdone) patty. The roll was fresh. I would have preferred a traditional tarter to the chipotle aioli, but the aioli wasn’t bad. Essentially the whole thing just ranked squarely at “capably executed,” and it’s difficult to get excited about capable execution. It’s all well and good for a quick sandwich at a lunch counter, or a $6 number wrapped in butcher paper and only destined to hit the spot, but a $15 sandwich at a fine sit-down establishment really ought to aim for a higher standard, don’t you think? The very fact that you’re putting together a crab cake sandwich really implies more advanced obligations. I’ll have to try another sandwich at Alcove, some chicken number, to see if their other offerings end up so middling. Given the crab cake sandwich, I won’t be holding my breath.