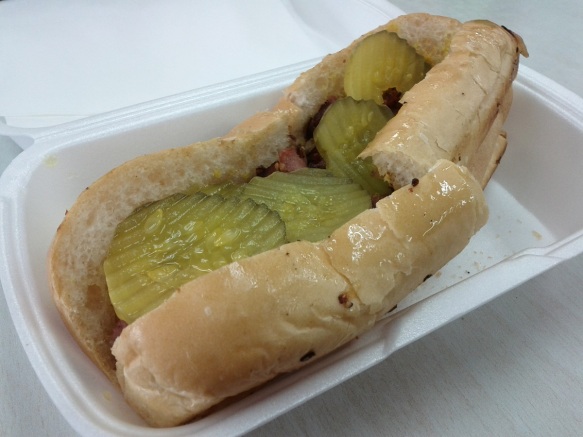 Don’t let the vertical orientation throw you; those pickles were easily pushed on top of the pastrami, easily making a proper sandwich. That’s not the story here. The story is how a sandwich that’s just pastrami, pickles and mustard relies heavily on the quality of the pastrami, and therefore one should have a reliable method for finding above-average pastrami. Luckily, such a method exists.

Willie’s Grill and Deli happens to be tucked inside the Alameda Jr. Liquor Market, a clean, well-lit liquor store with an ample selection. That’s a good sign for any sandwich counter. The logic is simple: By joining up with a cash-heavy, usually-profitable business the sandwich counter has access to lower overhead, in the form of cheaper rent when they’re a separate business or just general subsidy when they’re owned by the same people. This takes the pressure off they typically-thin margins of a restaurant, and more often than not that means a bump in the average quality of the food. Things tend to be more fresh, from quality producers, or provided at a better value. That was certainly the case at Willie’s, and it only strengthened my belief that if you’re looking for an above-average sandwich at a modest price, you can do a lot worse than head to a liquor store.